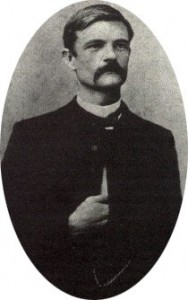 Samuel Porter Jones was the most famous and celebrated evangelist of his time, attracting a national congregation with style, wit and delivery. Nine years old when he came to Cartersville, Georgia with his widowed father in 1856, Sam Jones received his schooling under the tutelage of William and Rebecca Felton, later graduating from Euharlee Academy with high honors in 1867. At his father’s insistence, Jones studied for the bar at home and was admitted into the legal profession in 1868. Completely unsuccessful as a lawyer, Jones suffered mental depression and alcoholism, working at menial jobs for the next few years in order to support himself, his wife, Laura McElwain, and young children.

A miraculous conversation at his father’s deathbed in August 1872 turned Jones’s life around, and he entered the Methodist ministry that year. Jones managed several small circuits in Northwest Georgia until 1881, when he was appointed agent of the North Georgia Orphans Home, saving it from financial ruin by his evangelistic messages and personal magnetism. The appointment freed Jones from being tied down to local churches, and his preaching flourished and his reputation grew as he traveled the state raising money for the orphanage. Jones enjoyed preaching before large crowds, and in 1884 was invited to preach a revival in Memphis, Tennessee earning him high praise from the area newspapers which laid the foundation for his fame as a pulpit orator. Preaching in Nashville in 1885, Jones numbered among his converts there the infamous river boat captain, Tom Ryman. Ecstatic in his new found faith, Ryman then built a tabernacle for Jones and other preachers given the name Union Gospel Tabernacle, later renamed upon Captain Ryman’s death at the suggestion of Jones, the Ryman Auditorium, future home of the Grand Ole Opry. https://www.vacationsmadeeasy.com/NashvilleTN/articles/HistoryoftheRymanAuditorium.html

By 1886, at his own expense, Jones built a large open-air structure called “The Tabernacle” in his hometown of Cartersville. For twenty years until his death, thousands came annually to hear the great Sam Jones. He cared little for theological doctrine, emphasizing instead the simplicity of living a good life with a message as simple as “quit your meanness.” While his flamboyant style attracted the favorable attention of the masses, it raised the ire of Methodist leaders, and in 1893, Jones split with the church, continuing to preach as an independent evangelist until his death in 1906. Heading home to Cartersville from an engagement in Oklahoma City, Jones died of a mysterious ailment on the train near Little Rock, Arkansas with his wife by his side.

Thirty thousand mourners viewed the body as it lay in state at the rotunda of the Georgia State Capitol in Atlanta. Two thousand met the train in Marietta, Georgia and three thousand gathered at the depot in Cartersville when Jones came home for the last time. Though he had many opportunities to make his home elsewhere, Jones remained a resident of Cartersville throughout his successful career. Today, his home, Roselawn, on Cherokee Avenue, is a house museum owned by Bartow County.

For further information on Rev. Sam Jones visit the following links regarding his Tabernacle and Female College.