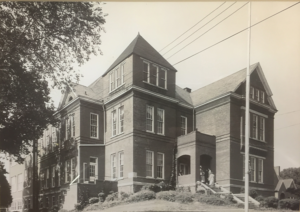 Upon the founding of Reverend Sam Jones’ Union Tabernacle in 1886, an additional vision was also afoot to establish a college dedicated to the higher education of young women. Little information has been located that offers full insight to this endeavor, but a few newspaper articles and deeds reference the project and mission it would serve.

In 1886, the Reverend Sam Jones proposed that if the City of Cartersville would provide him with a section of land he would build an open-air tabernacle in which to preach the gospel and hold annual revivals. His reputation as a powerful speaker and revivalist carried a great deal of weight among city fathers to comply with his request for a tabernacle . As a  separate agenda a second corporation was chartered and new Board of Directors elected to begin work to establish a college facility on the opposite end of the property.

According to deed records the Tabernacle Trustees assembled a tract of land in two separate transactions. The first was from Mr. Thomas W. Milner on September 16, 1886 in the amount of $500.00. A second purchase adjoining the first was made from Mr. William M. Graham on July 23, 1888 for $155.00. The total acreage for the tabernacle grounds amounted to some ten acres.

The tabernacle was built on the corner of West Main and Lee Street, property now occupied by the Cartersville Civic Center and Bartow County Library near the former Cherokee Elementary School. The college site would be north of the Tabernacle and fronting Market Street. (Cherokee Street today)

The Academy was a separate project intended to provide seminary training and college options for young ladies. Contrary to innocent beliefs, the Tabernacle nor the Sam Jones Female Academy were ever under the authority of the local Methodist (Sam Jones) Church. (Formerly, Cartersville Methodist Episcopal Church South)

Few people realize that the Tabernacle was laid out on a 10 acre site and was established under a private board of trustees. On that same tract of land a small parcel was quickly transferred over to a separate board to establish the Sam Jones Female College. Sam Jones paid for the construction of the Tabernacle out of his own pocket, but not so with the Female College relying on separate fund raising. The college faced what was then Market Street (now Cherokee) next to the former Cherokee Elementary School (now County Extension Office) and Lee Street.

According to a January 27, 1887 article in the Courant American Newspaper, architectural plans were drawn by Bruce and Morgan of Atlanta. The structure was to be aptly designed as a seminary for young ladies. The building was to be 48 feet high from base to the tower top including two stories and a basement. The foundation was to be stone, brick façade, slate roof, trimmings of terra cotta and galvanized iron. The first floor was to be classrooms and second floor would have an auditorium of 59×32 feet. It was designed to have a small apartment, eight feet wide halls, two stairways and be a structure of architectural beauty for the city.

The Courant Newspaper reported that construction bids were opened in March of 1887, with the low bid going to Messrs. N. S. Eaves and W. B. Wallace, both residents of Bartow County. Work was authorized to begin immediately. The corner stone ceremony was scheduled in May with Eminent speakers to be present including humorist Bill Arp.

Subsequent articles appeared in the newspapers lending reports on construction progress and the great amounts of materials and money piled up to complete the mammoth brick project. Soon one could began to see the venture was facing difficult financial troubles. Related articles focusing on other topics hinted that the College project may not have weighed the reality of enrollment development vs revenue and tuition returns. It appeared zeal for the project began to wane and funds slowed, bills mounted and leans were brought against the corporation.

By November 1889 the stockholders were facing receivership action to settle debts. A meeting was held and agreement reached to sell the property to the City of Cartersville for a public high school facility. It was estimated that the city secured the property for about one third the cost of the actual value.

According to deed records an indenture was filed in the Bartow County Superior Court and the property was sold to the City of Cartersville for $2500.00. The city graduated its first senior class in 1891 and used the adjacent Sam Jones Tabernacle as the graduation venue for the first two graduations until the gym was built. 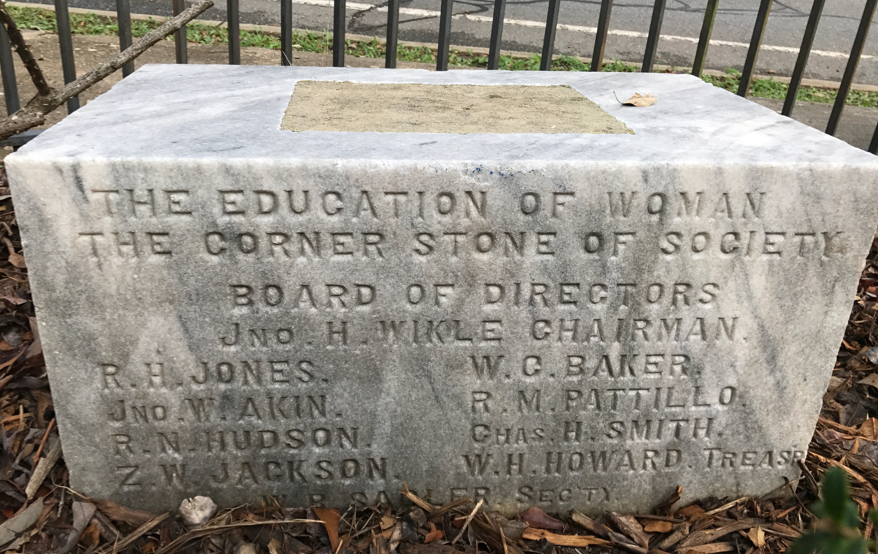 According to 1983 Etowah Valley Historical Society Minutes, an entry was made that the former Sam Jones College, city high school and junior high school served the community for three quarters of a century… “exists no more,” implying it was razed by order of the city. The minutes further reflect that Mayor Dent arranged for the Society to take possession of the cornerstone. The stone also served as a time capsule containing newspapers, letters, Sam Jones Song Book, bills from contractors and one small clay marble. EVHS has placed the stone “on loan” at the Roselawn Museum.

The Sam Jones Female College did not enjoy the same success as did the longer enduring Tabernacle, but did become the City of Cartersville’s first public high school in 1890 and then became the junior high school after 1953.

The story of Rev. Sam Jones has been well told since 1886. However, his Female College was rarely cited and has not been covered nor understood regarding origin, operations, management and what became of the facility. Both the Tabernacle and College are fading tributes to a once mighty southern gospel voice.