The Ancient Rock Walls of Bartow County By William Phillips

Bartow County has remarkable ancient stone structures that have a history every bit as exciting as the far more recognized mound sites (Etowah and Leake), and numerous ancient village sites scattered across the county.  However, stone features are almost always sidelined for investigation due to many archaeologists having been indoctrinated that in North America, “Native tribes never built with stone” – and therefore investigation of stone features is useless.  This has caused the destruction of great numbers of rock features because they were misidentified as being built by early settlers, therefore not important to preserve.  This article will consider the complexity of design and precise construction behind these features.

We are fortunate to have walls that are still in good condition, and must strive to insure their conservation.  This year, as information on the walls has been compiled, additional walls were discovered, and many adjacent features documented (often, archaeological investigations would make no mention of these “associated” stone features within the surrounding area).

There are so many stone features to study, we will focus on walls in this article – and focus upon other features in future articles.  Because different types of features are encountered together, listing the types of stone constructions will help with understanding what is present at a site.

Wall – perhaps straight, circular, or other shapes – Indian walls are: 1- dry stacked (no mortar used), 2- often incorporate astronomical alignments, 3- usually have a prominent cultural context, 4- are built at a place of importance (such as mountain summits), 5a- align with other Indian sites, and 5b- align with local geological and topographic details.

Cairn – a “stonepile”; either carefully stacked or a loose assembly.  Often mistaken for “graves”, the vast majority are, instead, important components of the site .

Pavements – a rock “veneer” layer over an area; flat or very low profile.

Marker – placed to indicate a significant spot; stones of all sizes are used; prone or standing; often quartz or imported stone is often utilized. 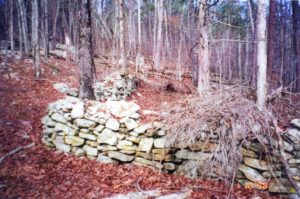 The best preserved, largest, and most beautiful wall in Bartow county is 500 feet long, averages almost 6 feet in height, 2.5 feet thick, and runs exactly East-West (marking the Equinox solar path).  It is made of round flint nodules, about the size of a basketball, that are so carefully stacked that the sides and top appear flat and smooth.

Other construction traditions of Indian sites include: 1- Premium materials: this wall utilizes quartz blocks and iron nodules; and 2- Relevance to local topography: here, the wall is (directly) connected to a prominent hill, (directly) linked to a huge flint rich area, and (indirectly) associated with several water features located further away.

Adjacent features are numerous, including: many cairns (of various sizes), a small (20′ long) snake effigy, a medium sized ceremonial area with a pavement and several cairns, a cursus (a ceremonial walkway with stone curbs), several smaller walls, and a nearby hill whose summit is covered with cairns and an acre-sized pavement.

Combining recent field discoveries and recorded archaeological data, this area is found to have: a vast flint outcrop area with many workshops (to make arrowheads, knives, spear points), stone constructions located far from the wall (1 mi South, .5 mi West and East, 2 mi NE… and we are still finding more), and there are several village sites within 5 miles.  Rather than being one isolated wall, the remarkable conclusion is that this is a large complex that covers several square miles.

There are two Snake Effigy walls, located in valleys. One wall is 420′ long, the height varies from 1.7 to 4 feet, and the width is 2 feet; the downstream end is 6′ above the creek bed, then the wall ascends a side of the valley, and stops 15 feet short of the ridge dividing the next valley.

The other is 275′ long, of equal height and width as the longer wall, and also ascends a hillside, the last 25 feet at the eastern end turns uphill, and connects to a very dramatic head assembled of several standing stones 5 to 7 feet high.

These walls undulate sideways in a serpentine fashion – and have a widened “head” end, and a narrow “tail” end.  Both are made of local, flat fieldstone – the flat shape gives an appearance of snakeskin scales that, at a distance, looks remarkably like a snake slithering up the valley.

There was a wall at the summit of Ladd’s mountain – although it was destroyed for a source of gravel.  Archaeological descriptions describe it as “enclosing 40 acres” – however, this does not match the terrain, as a circle this size would be 1,050 feet in diameter – the most likely situation is that the wall was closer to 500′ diameter with many acres of “associated areas” (as is typical of other sites) arrayed with many cairns and other artifacts.  EHVS is interested in clarification of these details, as misinterpretation of reports confuse the historical record – and confuse the public.

There are a couple of snake effigy walls North of Cartersville, on restricted access land – that are evidently larger than the effigies in the South of the county.  They are situated in moderately hilly terrain adjacent to streams, just like the other snake effigies.  Existing documentation (photographic, measurement, and cultural interpretation) is available relating to these constructions.

Bartow County holds yet another unexplored treasure related to our Native American heritage. This study has tentatively identified up to 34 rock structures scattered throughout the county most of which are located in the lower portion of the Etowah River valley.

I would like to acknowledge J. B. Tate and Bill Hudson for their assistance in field research and interpretive contributions.