2020 brought many challenges among which is that it is not yet safe to have an in-person event for the Fourth Annual Black History Celebration. Therefore, we asked visual artists, musicians and actors to provide a virtual program for you to enjoy. The video series will be released one video per week beginning February 10. It is available to anyone interested free of charge. The artists share about their work, processes, inspiration and careers. We hope you enjoy!

Please click the link below to experience the Sound of Africa Concert from February 2020.

View a one minute overview of the 2019 Taste of Africa event by clicking the link below.

Alexis Carter-Callahan graduated from Georgia Southern University in 2005 with a B.S. degree in Criminal Justice. In 2015, she graduated from Armstrong State University with a M. A. degree in United States History. She previously served as the Assistant Director of Multicultural Student Affairs at the University of North Georgia. Currently, Mrs. Carter-Callahan is researching and writing about enslaved life in the antebellum South. She is a board member of Noble Hill-Wheeler Memorial Society and an African American historian with the Etowah Valley Historical Society.

Ms. Carter Callahan researched and wrote the history of George Washington Carver Park, one of the ten black heritage sites on the Black History Trail of Bartow County. The paper was published in the Etowah Valley Historical Society Newsletter, and after additions, has now been published under Authors’ Corner at evhsonline.org.

The Fight to get Bartow’s Negro Leagues Standout into Cooperstown

Poet, short story writer, author of two romance novels and owner and founder of the publishing company, The LuvvSyc Alliance, Krys also works with audio visual, MC and public appearance, has post graduate studies in law. She interviewed Eddie Lee Wilkins of NBA fame and has written “The Eddie Lee Wilkins Story” which is under revision at present. When finished, it is to be published on the web site of EVHS.

The sculpture, Pathways to Freedom: A Story in Every Stitch, unveiled in front of Cartersville City Hall, commissioned and paid for by AAQDP, will soon see the installation of interpretive signage and the donor plaque. (Funded in part by the Cartersville Visitors Bureau, CVB)

The African American Quilt Documentation Project of Bartow County launched its mission on August 24, 2017 with a small exploratory committee who articulated ten purposes focusing on African American historical preservation and education. The perceived need arose out of Memories Day at George Washington Carver Park.  Recognizing that those quilts used at Carver in its heyday of camping would be historic cultural icons, they were in need of rescue. 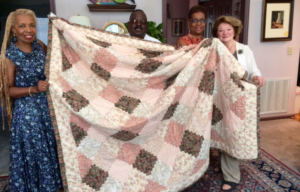 Thus began the search for and documentation of local African American quilts to record the historical information like the maker, related stories, age and photo. Hopefully, this will stimulate an interest in family history, genealogy studies and make possible a public program on the past generations of two or three AA Bartow County families.  The documentation will be filed with the Bartow History Museum, the AAQDP and other county archives.  All quilts, whether made by African Americans or other, are welcome. One purpose of locating quilts is to ask for them later to exhibit at African American events.

The Sculpture: “Pathways to Freedom: A Story in Every Stitch”

The AAQDP has commissioned sculptor, Przemyslaw Kordys, to craft a freedom monument memorializing humanity under slavery, represented by quilt squares, which according to legend, aided in the daring effort of escape.  Stories of flight were passed down by oral tradition, in which the quilt patterns were given code meanings and a quilt, unnoticed when hung out to air, communicated the appropriate direction, caution, help, transportation and the like. 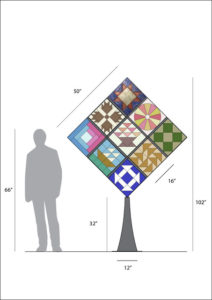 The public sculpture is entitled, “Pathways to Freedom: A Story in Every Stitch”. The quilt motifs of the monument symbolize the hopes and dreams of the pioneers of freedom, of their desire to own oneself.  The work is a public reminder to children that a slave’s only freedom was escape.  It is an affirmation that those who had the courage and cunning to liberate themselves began the pathways to freedom. The public is invited to the Unveiling on May 10th, 2018, 2:00 pm. under the bridge in Cartersville, Georgia.

The sculpture depicts nine quilt blocks fitted into a diamond shape and standing 8, 1/2 feet high.  The conventional quilt designs to be placed within each grid of the armature represent quilt patterns that, according to oral accounts, were given code meanings to facilitate the secret communication for escaping slaves.  Oral tradition reports that a quilt could be hung on a fence, hedge row or clothes line, presumably to air; but rather, unnoticed, would communicate essential information for an escapee.  The Road to Freedom block indicated “which way to go” according to its directional orientation, the Monkey Wrench said, “Escape is planned, gather resources.” The Wagon Wheel was for “transportation available”; bow tie for “change of clothes”.   The star meant “follow the north star”.  An escapee traveling under cover of darkness used the North Star as his guiding beacon.  The star motif will be placed in the center of the diamond shaped sculpture in homage to the generations of enslaved African Americans, some of whom realized the dream of self-determination through self liberation.

According to the legend and folklore surrounding the stories of escape, there were more than ten codes represented by quilt squares, but only the essential ones are included in the sculpture.  This monument is not a factual depiction of documented history, rather is symbolic of oral accounts that undeniably represent the hopes and dreams of deliverance by a slave population, many of whom eluded captors and set themselves free.

The history of America includes slavery; all Americans share a history which involves slavery.  This monument gives homage to the humanity that spent centuries under bondage.  They were not considered citizens, but were fellow humans nevertheless.  For the descendants of slaves, it is a memorial to their forebears.  For children and for generations to come, it will serve as an educational reminder that a slave’s only freedom was escape.  His daring to flee meant willingness to risk torture or death if caught, but worth the peril in order to gain the human dignity of owning oneself.  The quilt squares are symbols of the slave’s courage and cunning to escape.  Those who did, and the quilt makers who aided and abetted in the commission of their crime, were the pioneers of emancipation.  They stepped into a world they had never seen before, took a hazardous journey to forge the pathways to freedom.

Teresa Cook, graphic artist and quilt artist, created the graphic quilt design below for the note cards of the African American Quilt Documentation Project of Bartow County.  The Community Quilt of the AAQDP is of the same design rendered in printed fabric.  Each design, the graphic or the quilt, is a composite of traditional quilt patterns which, according to legend, in the world of the Underground Railroad and slaves in flight, becomes a secret code to facilitate escape, giving them the designation of freedom symbols.  According to legend, runaways benefited from a clandestine communication in the display of quilts.  It is not known how general this use was or if it can ever be verified.  There are no historical documents to prove it, but stories have been handed down through the oral tradition, embellished with each generation’s retelling.  Presumably, if a quilt were hung out to air, no one but the initiated was aware of the message.  Additionally, it is believed that Negro spirituals, like the symbology of quilts, have double meanings in the words.  “Swing Low Sweet Chariot” may have been calling on Heaven’s gates, but was used to signal transportation for the escapee as well.  Today, the stories remind us that a slave’s only freedom was through self- liberation.   Usually, those in bondage were not allowed to learn to read and write, would not have risked capture by leaving written evidence even if they could write.

In the composite design, Ms. Cook arranged the quilt patterns to create the narrative of a possible escape.  Of course, a real quilt has a repeated single pattern traditionally, so when hung on a fence, clothes line or hedge row, it conveyed a single message of direction, food, clothing, safe house and so on to the fugitive. 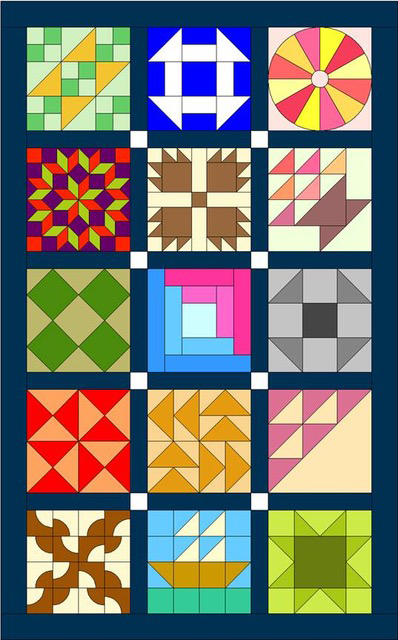 Meaning of each block from Left to Right

Flying Birds:  Same as above

Sailboat:  Cross over to Canada

Cards will be placed for sale in some of the historical societies of Bartow County. They are sold in packages of five cards for $10.00.

The Community Quilt will be in a frame at Memories Day and the public is invited to stitch on it.  When finished, the Community Quilt will be used for educational purposes, for lectures to groups.  Junior High School students in the Etowah Valley Historical Society’s Bartow History Scholars program have requested lectures on Bartow County African American History and by African American guest speakers.  To request a lecturer for your club or professional group, email jdonharp@aol.com.

Unveiling of Freedom Monument,
Pathways to Freedom:  A Story in Every Stitch.
includes Community Quilt of Freedom Symbols

Those interested in supporting the African American History Initiative with a donation may send it to the Etowah Valley Historical Society, designated for history initiative, at evhsonline.org or mail check to EVHS History Initiative, PO Box 1886, Cartersville, Ga. 30120.