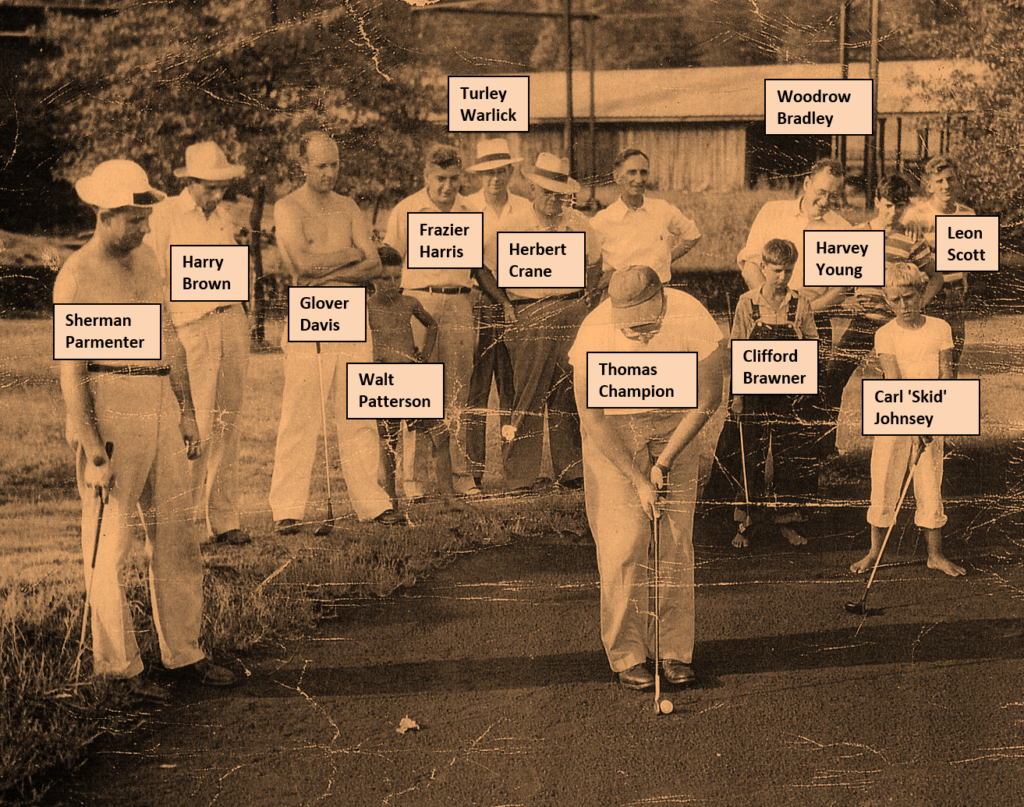 The following article was published in The Tribune-News, June 27, 1929, under the title “Local Golf Course Has Important and Noticeable Niche in Sportdom”. As wheels of progress turned their cycles towards greater industry and business for Cartersville and Bartow County, they made an extra revelation in order that sports and recreation might be included in the assets of which this section is justly proud. Bitten by the “golf bug” that seems to have been rampant in the nations a few years ago, a number of Cartersville enthusiasts in 1925 combined to form the Cartersville Golf Club which started off with 20 charter members. Since established the club has risen to be one of the most popular organizations in the vicinity and now ranks on par with all other civic groups of the community. In 1925 there was no course in “Cartersville, but the club members, determined to have one, secured the loan of propriety from the city and developed it. Nine holes were completed that year, but the roughs and greens were almost inseparable and alike. However, Rome was not built in a day and neither was a golf course. As time passed, the members sought to improve the course that had been so ably designed by H. R. Womelsdorf. No change has been made in his plan, but from time to time the course has been so improved that it has been claimed by many to be one of the best in North Georgia. Fuzzy Woodruff, sports writer for the Atlanta Journal, after a pleasant round in which he swung not so many times, pronounced his opinion that the course was splendid.

Today [1929] the nine hole course covers 30 acres and has a par of 34, which has been broken several times, notably by L. O. Bishop, the club champ and A. G. White, Jr., both of whom have journeyed around in 32. The club now has 60 members. It is distinctive that the local course has been honored with three holes in one all of which to the layman is nothing but so much Chinese. But to the follower of the little white sphere, it is but his highest ambition and to the club it’s a thing that comes but once in a lifetime and to the skilled wearer of the knickers and sox it’s nothing more than a pleasant mishap caused by the hand of kind fate. J. H. Calhoun was first president of the club. He was followed by O. T. Peeples and W. J. Weinman who now heads the organization. T. J. Champion is a director and one of the outstanding members, having been partly responsible for the great progress made. END of TRIBUNE-NEWS ARTICLE.

Now in the current year of 2019 more to this story is known and able to be shared. Across Tennessee Street, a house which is now the law firm of Archer & Lovell, overlooked the golf course and was owned by Mr. and Mrs. George Washington Brooke. Mrs. Brooke was the former Emily Jones, sister of Robert Purmedus Jones, father of Robert Tyre “Bobby” Jones, the most famous golfer of his time. Bobby visited his aunt on occasion, however never found time to play the Cartersville course. He did encourage his aunt to learn the game and even left a complete set of his old clubs for her use, however she never took up the game. A group of local golfers including Milton Fleetwood, publisher of the local paper, and Mr. and Mrs. Brooke attended an exhibition round of golf played by Bobby Jones in Canton. They hoped he would come to Cartersville and do the same, however his time did not allow it. The 1925 Cartersville Course was built on land occupied by the newly formed Bartow County Fair Association in 1914 which was south of Cartersville, bordered by South Erwin Street to the west, Cook Street to the north, Tennessee Street and the Railroad to the east and Old Mill Road to the south. 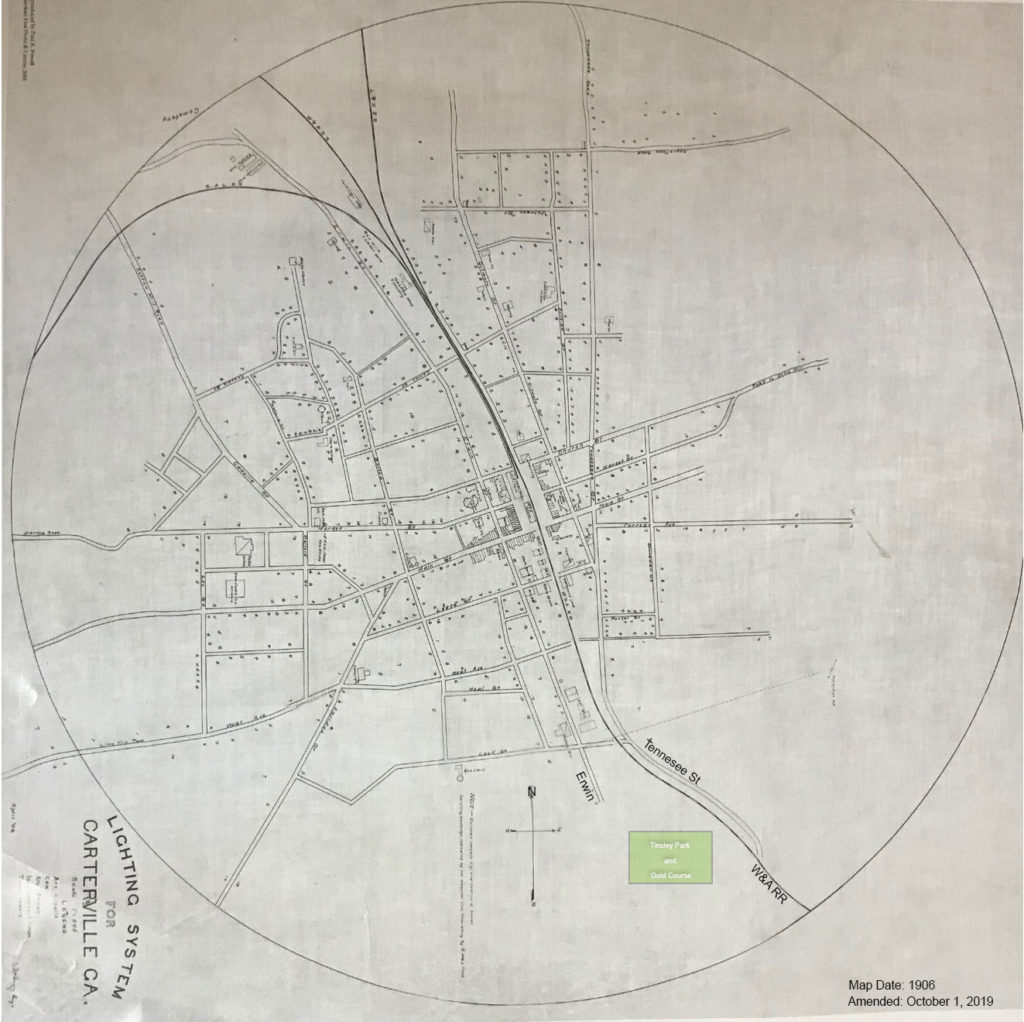 The Fair had previously been located since 1869 on 40 acres owned by the City of Cartersville north of town along the west side of Cassville Road from the Railroad to Pettit’s Creek (site now occupied by Self Recycling). The Bartow County Fair moved to its new and current home in Cartersville during the fall of 1948 surrounding the newly erected American Legion House and Memorial facing Martin Luther King Drive, formerly Moon Street. Originally the Legion used the site occupied now by the Market Square Shopping Center (Hobby Lobby and Big Lots) for the Fairgrounds up until 1972. Since that development, the Fair uses their remaining grounds for the annual Fair.

Cartersville High football established in 1909 played at first on Jones Field to the west side of the old High School (formerly Sam Jones Female College fronting Cherokee Avenue/Field now paved over). Play was moved to the Fairgrounds in 1914, though no permanent stadium was ever built as the site was of multi-purpose use. The Cartersville City Council did approve seating for 500 in 1948 after the announcement of the Fair’s move, however several citizens of the time did not remember any permanent seating. Cartersville High football moved to its current home on East Church Street in 1955, bordering the new high school whose doors opened in 1952. The new stadium was named for Andy Weinman, former Cartersville coach and one of its largest supporters.

The Fairgrounds became Cartersville’s Municipal Park in 1920, named for T. W. Tinsley, Fair Association President who became Mayor two years later. A swimming pool followed in 1923 and the golf course in 1925. A baseball field and tennis courts were added in time. Certain citizens worked with The City of Cartersville and Chamber to expand its industrial base around 1950 and the old Fair Grounds were selected as a future industrial park. The Fair was now gone and the Golf Course was behind the times with its design and sand greens. Its tees & greens were arranged around the parks perimeter with fairways crossing in the middle which created a pedestrian obstacle especially when other activities were taking place. For those who are uneducated on the subject of sand greens, golfers putt on sand rather than grass. These were quite common in the old days as modern golf course science was in its infancy. The sand was oiled to provide a consistent putting service and to prevent weeds and erosion, however play required the use of a strait edged rake to provide a smooth surface on which to putt. The golf course, pool and tennis courts by most accounts were abandoned when the land was offered for development. Golfers in particular began playing in other surrounding communities such as Rome, Rockmart and Cave Springs. Football continued up to 1955. Tennis courts, pool and the baseball field were later moved to the land surrounding the new Cartersville High School. With the development of Dellinger Park in 1976, a new home was found for the tennis courts and pool and since that time Cartersville has steadily moved forward with recreational facilities in numerous locations to meet the needs of a growing population. The old baseball field at the high school was moved to the sports complex on Sugar Valley Road not to many years ago. The City’s industrial plan paid off in 1954 with the commitment of Cartersville Undergarment as its first industry in the new industrial park. Golf did return to Cartersville in 1954 with the founding of the Cartersville Country Club. Next was Green Valley Greens, a privately owned public play course in 1969. Last was the City owned Golf Course “Royal Oaks” in 1971 which is now known as Woodland Hills and privately owned for use by both members and the public. Tinsley Park and the old Fairgrounds are now just a memory which is fading away with time, however it once brought so much joy to a growing community.

Interview with Dave Tillman featured on Perspective with Hershel Wisebram