The namesake  of a community can provide profound insights into the communal identity of its early residents and their relationship to the landscape in which they lived. Place names often describe a topographical feature, signify a kinship relationship to a particular locale, or commemorate a person, place, or event which is seen as being particularly representative of a community’s character.[1] This has been especially true in the history of Bartow County and its former county seat of Cassville. Amidst the dramatic opening events of the Civil War, both county and town underwent a dynamic process of renaming.

When the county and county seat were established in 1832, it was decided that both should be named in honor of President Jackson’s Secretary of War Gen. Lewis Cass.[2] Cass was an esteemed Democratic politician from Michigan and a major proponent of Indian removal. As such, he was exceptionally popular among Georgians who were eager to seize Cherokee lands. The people of Cassville and Cass County would continue to hold Cass in high regard throughout the antebellum era. The editors of the Cassville Standard would routinely include letters, addresses, news, and approving editorials about Gen. Cass in their weekly issues. They even strongly endorsed a nomination of Cass as the Democratic candidate for the 1856 presidential election.[3] 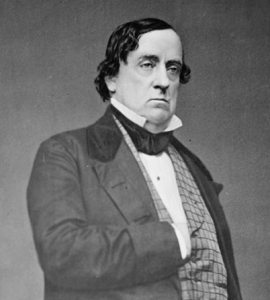 With the outbreak of the secession crisis in the winter of 1860, Cass’ popularity would begin to wane. During his long political career, Cass had earned a reputation as a political moderate and advocate of sectional compromise.[4] But, he was also an ardent Unionist who dismissed secession as unconstitutional and believed that decisive action must be taken in order that the Union be preserved. Cass’s desire for decisive action would eventually lead him into conflict with President Buchanan in whose Cabinet he had been serving as Secretary of State. For weeks, Cass had tried to convince Buchanan to reinforce federal fortification in Charleston harbor. Cass believed that without reinforcements federal garrisons would not be able to withstand secessionist attempts to seize the forts. Buchanan refused Cass’ appeals and on December 18 Cass resigned in protest.[5]

As the secession crisis turned into open civil war, Cass would demonstrate his strong support for the Union cause. In a speech delivered before a Union meeting in Detroit just after the Confederate siege of Ft. Sumter, Cass expressed his desire “to do all I can to manifest the deep interest I feel in the restoration to peace and good order and submission to the law of every portion of this glorious Republic.”[6]

Such pro-Union statements did not engender Cass praise from Confederate supporters in Cass County. Therefore, in the fall of 1861, county leaders drafted legislation to provide the county and Cassville with new names which reflected their new identity as part of the fledgling Confederate nation. With the Confederate victory at the First Battle of Manassas on July 21, 1861, patriotic sentiment in Georgia was at high tide. Yet, this victory came at a price for Georgians who suffered their first high-ranking casualty of the Civil War–Col. Francis Stebbins Bartow.[7] Bartow had distinguished himself as a congressman in the Georgia General Assembly and was among the Georgia delegates sent to the Montgomery Convention of the Provisional Congress of Confederate States in February 1861.[8] He was also captain of Savannah’s elite Oglethorpe Light Infantry and when the Civil War began he volunteered their services to the Confederate war effort.[9] Bartow rushed his “Oglethorpes” to the front in Virginia where he was elected Colonel of the Eight Georgia Infantry Regiment.[10] 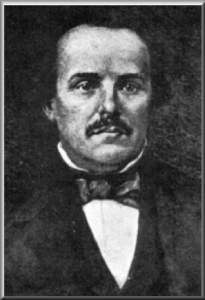 By July 1861, he was commanding the Second Brigade of the Confederate Army of the Shenandoah which he would lead into battle at First Manassas.[11] On July 21, 1861, the Battle of First Manassas commenced.[12] After taking a meandering course to reinforce the Confederate line’s extreme left, Bartow’s Brigade engaged the Union enemy. As the battle raged, Bartow would have his horse shot out from under him and on several occasions he would have to take up the regimental banner to rally his troops after the color-bearer had been killed.[13]At a critical juncture in the battle, Bartow would fall after being shot through the heart while leading an assault on Capt. James B. Rickett’s Union battery.[14] As he lay dying, Bartow is reputed to have exhorted his troops stating, “They have killed me boys, but never give up the field.”[15] Bartow’s troops would heed this final order of their fallen commander and capture Rickett’s battery, thereby helping to secure a decisive Confederate victory over the Federal forces. 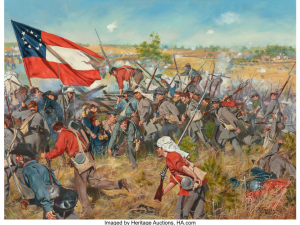 Never Give Up the Field by Don Troiani

After the battle, his body was recovered and prepared for transportation south for burial. Bartow’s death was mourned throughout the entire Confederacy. Upon receiving news of his passing, the Confederate Congress broke from their regular session to eulogize their fallen colleague.[16] Bartow’s casket also lay in the Confederate capitol at Richmond before being shipped to Savannah for burial in Laurel Grove Cemetery with the full military honors.[17] Additionally, he would be posthumuously breveted to the rank of brigadier general.  His naitive Georgia would feel his loss keenly and would go to considerable lengths to memorialize his sacrifice. Newspapers throughout the state would praise Bartow for his gallantry and leadership.[18] Several Georgia military companies would name themselves in his honor.[19] But, the greatest tribute he would receive was from the people of Cassville and Cass County who would commemorate Bartow’s memory by renaming their county and county seat in his honor.[20] 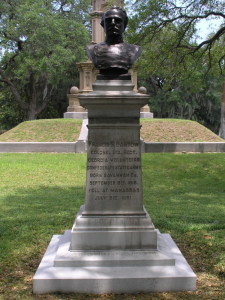 The process of renaming would prove a unique episode in the history of Cass County. Two of the leading figures behind the drive for renaming the community were the Hon. Warren Akin and Hon. Samuel Sheats, who were serving as Cass County’s state representatives at the 1861 session of the Georgia General Assembly at the state capital of Milledgeville. On November 9, Sheats introduced a bill to the Georgia House of Representatives which would begin the transition. The bill proposed to change the name of Cass County to Bartow, and the name of Cassville to Francis.[21] This proposal was received with great applause by members of the House.[22] On November 13, the bill was taken up and amended at the suggestion of representatives Lester, Whittle, and Black.[23] Hon. Black amended the bill so as to substitute Bartowville for Francis as Cassville’s new name.[24] The amendment was approved and the bill was passed ‘with a rising vote’ and sent to the Georgia Senate.[25] 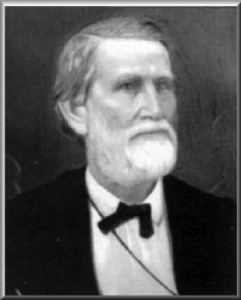 Meanwhile in Cassville, a number of the town’s major institutions were closely following the House debate over the town’s new name and took  measures to reflect the proposed change. In particular, the Cassville Female College would temporarily rename itself  the Bartowville Female College to reflect the town’s new civic identity.[26]These changes would only last a few weeks. For when the bill was received by the Senate an alternative name would be proposed

On November 30th, the Senate took up the bill where it became apparent that not everyone in Cassville was happy with the name change. Just before Hon. D.R. Mitchell took up the bill for amendment, a communication by Hon. Akin and Sheats was read which stated they had addressed their constituents regarding the renaming process and found a significant portion of them were opposed to the change.[27] Whether this opposition was rooted in a residual Unionism among a portion of the Cass County populace is difficult to ascertain. However, Akin and Sheats made their case to their constituents “why no foot of soil in Georgia should, in their judgment, bear the name of Lewis Cass.”[28] They also stated that they would press the bill to its passage in opposition to the fairly expressed will of their people.”[29] Despite this communication, the bill was taken up for amendment with Mitchell proposing to substitute Manassa[s] for Bartowville.[30] The bill was passed and sent for final approval to the House, which passed it with no further amendment and a resolution was drafted requesting the Postmaster General of the Confederate States to change the name of the Cassville post office to Manassas.[31] The bill would finally be signed into law as an act on December 6th, 1861.[32] As part of its final form, the Act contained a preamble which provided a brief summary justifying the name changes of Cass County and Cassville. The preamble condemned Lewis Cass as an inveterate Unionist bent on subjugating the South by whatever means necessary, thereby becoming “unworthy of the honor conferred by the naming of said county.”[33] The preamble also commended Bartow who gallantly died for his country while bravely leading his men in battle on the “Manassas Plains.”[34] By renaming the community after Bartow, its leaders would hand down his name and cause his “memory to live ever green in the hearts of succeeding generations.”[35] 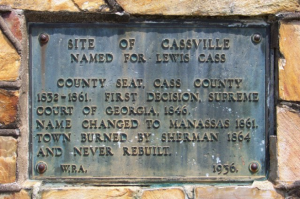 Cassville would retain its new name of Manassas throughout the Civil War.[36] But with Union victory in April 1865, the Federal Postmaster General would have the name changed back to Cassville. Only Cass County’s new name commemorating Col. Bartow would survive the flames of war and the restoration of the Union.

[1]Some excellent local examples of these kinds of place names are Red Top Mountain, Pettit Creek, and Cartersville.

[6]Proceedings in Congress Upon the Acceptance of the Statue of Lewis Cass Presented by the State of Michigan (Washington: Government Printing House, 1889), 91.

[7] Bartow was also the first Confederate brigade commander to be killed in the Civil War.

[11]Clement A. Evans, ed. Confederate Military History: A Library of Confederate States History Written by Distinguished Men of the South, Volume 6. (Honolulu: University of the Pacific, 2004), 64. The Second Brigade was composed of the Seventh, Eighth, Ninth, and Eleventh Georgia Regiments of Infantry.

[16] Proceedings of the Congress on the Announcement of the Death of Col. Francis S. Bartow, of the Army of the Confederate States, and Late a Delegate in the Congress, from the State of Georgia (Richmond: Enquirer Book and Job Press, 1861), 4-5.

[24] Journal of the House of Representatives of the State of Georgia at the Annual Session of the General Assembly Commenced at Milledgeville, November 6th, 1861. (Milledgeville: Boughton, Nisbet, & Barnes, State Printers, 1861), 54.

[30] Journal of the Senate of the State of Georgia at the Annual Session of the General Assembly, Begun and Held at Milledgeville, the Seat of Government in 1861. (Milledgeville: Boughton, Nisbet, & Barnes, State Printers, 1861), 187.

[32] Acts of the General Assembly of the State of Georgia, passed in Milledgeville, at an annual session November and December 1861. Published by authority. (Milledgeville: Boughton, Nisbet, & Barnes, State Printers, 1861), 101.

[36] Some confusion would however persist about the town’s name among newspaper editors as evinced by the February 12, 1865 issue of the Columbus Times.