Mining in Bartow County has been an important facet of the county’s economy for much of its history. The iron industry was made possible by the early discovery of vast iron ore (limonite) veins in the southeastern part of the county, and the mining industry grew to include manganese, barite, umber and ocher. Smaller deposits of graphite, copper and gold have also been exploited in this region known as the Cartersville Mining District. Another part of Bartow County’s mining history, and one which has been largely neglected yet was at one time of great importance, was the mining of nitrates. 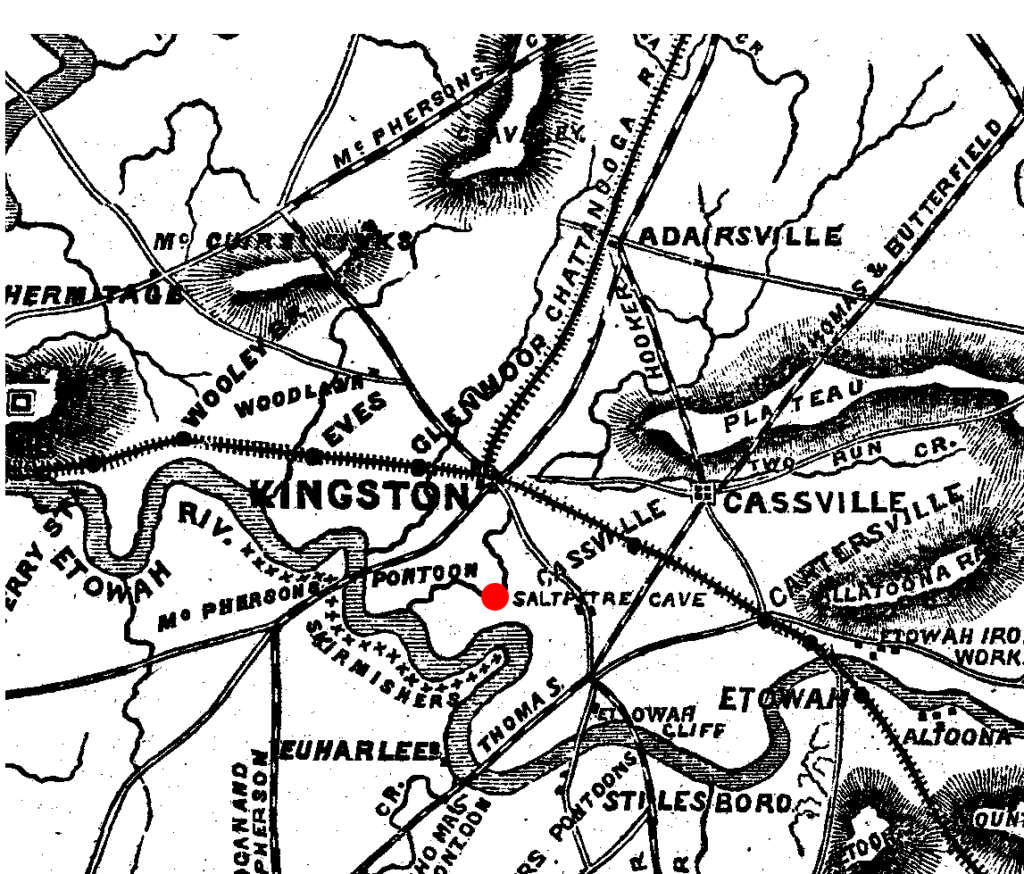 When mixed in proper proportions with sulfur and charcoal, saltpeter – potassium nitrate – forms gunpowder. The ability of early colonists to procure their own supplies of this essential substance enabled them to successfully fight the Revolutionary War and the War of 1812 despite blockades by England. During the American Civil War, the Confederate Army relied on obtaining saltpeter from domestic sources after the Union blockaded Southern ports.

In all of these conflicts it was largely the earth from caves that was mined and processed for the nitrates. In Bartow County three caves were mined for nitrates, these known today as Jolly Cave, Yarbrough Cave, and Kingston Saltpeter Cave. Of the three, only the latter was on any large scale, owing to the size of the cave as well as its large quantity of high-quality nitrous earth.

The cave mining process was fairly simple and easy to replicate, and the operations were similar from cave to cave. Earth was dug from the passages and rooms of the cave, loaded into burlap bags or wheelbarrows, and taken to a central location either inside of the cave or outside, for “leaching”. The dirt was placed into wooden hoppers or “vats”, after which water was poured and allowed to stand for several days, being occasionally stirred with wooden paddles. The water would take the nitrates into solution, and would then be collected at the base of the vat. This aqueous solution was then transported to cast iron kettles nearby to be boiled, a process known as “lixiviation”. Since the nitrate that had been obtained from the cave earth was actually calcium nitrate, wood ash was added during the lixiviation process to convert it to potassium nitrate. Once the water was boiled off, the precipitate was collected and bagged, and transported to gunpowder factories, in this case likely the Confederate Powder Works in Augusta.

Mining at Kingston Saltpeter Cave began as early as 1804, by a William Nicholson who rented the cave from the Native Americans for a price of two hundred pounds of powder annually. By 1809 the mining operation had come under the ownership of a William Reed, who lived close to the cave at that time, but due to an altercation that resulted in a murder his operation ceased about a year later. Although there are no extant records of mining during the War of 1812, there is evidence that suggests that some use of the cave was made for that purpose then, as well as intermittently during the mid-1800s. It was in support of the Confederate cause, though, that the cave gained its greatest fame.

There were many saltpeter caves located throughout the South during the Civil War, principally in the Virginias, Kentucky, Tennessee, and Alabama. While some of the operations were larger than that at Kingston, the fact that this cave was situated so far south contributed to its importance, as it was still in operation long after others had been destroyed by the Union forces. A report dated July 31, 1862 stated that in the spring of that year all important saltpeter caves in the country, except for the one in Bartow County, were in Federal hands.

Referenced at the time as “Bartow Cave”, “Bartow Saltpeter Works”, or simply “Saltpeter Cave”, the cave was producing saltpeter at the time hostilities began, but at a quantity deemed too low. Consequently, on June 14, 1862 the Confederate government seized the property, and production at the cave increased. Army conscripts and slaves were utilized for labor, as many as 233 shown for one month.

On May 17, 1864 General William T. Sherman noted in his personal narrative that “… [General] McPherson…was about five miles to my right rear, near the ‘nitre caves’…”. Then, early on the morning of May 19th, the saltpeter operation having been deserted by the workers, Federal troops converged on the cave. Brigadier General Kenner Garrard wrote that “the works at Saltpeter Cave are extensive and in good running condition.” The works were destroyed by his troops the following day. Three days later a soldier in the 4th Army Corps would write in his diary, “We pass[ed] the smoking ruins of an old powder mill, which has been used for the manufacture of that article.”

Today the cave stands in mute testimony to its part in the war. With the production facilities having been located on the surface outside of the cave rather than within the cave as they were at many other sites, all vestiges of that industry are now gone; what wasn’t either destroyed in place or carted off by the Union troops has since rotted away. Piles of leached tailings are yet visible a short distance from the cave’s mouth. Inside, nearly every area of the cave was worked for the nitrous earth and evidence is even now apparent. The cave’s original floor level, which had been lowered in many places by digging, can still be seen. Passages and rooms that have been dug out; pick marks in the cave earth; tally marks on the walls, recording quantities of earth removed; large piles of “sift stones” that remained after mining; drill marks in rocks from the use of explosives; and several torch fragments all attest to the former mining activity in the cave. One remaining cast iron kettle from the cave, whose provenance has been established, is on display in nearby Euharlee.

Local tradition holds that before they left the cave workers hid tools, weapons and ammunition in a passage in the cave and blasted the passage shut. Extensive searching for such a place within the cave by this writer and others has been unsuccessful.