The son of William Hollingsworth Wofford and Nancy M. Tatum William Tatum, Wofford was born June 28, 1823. He had two sisters, Rachel and Martha. The family ancestors were Revolutionary War heroes who had migrated to north Georgia to settle in the Habersham County area.  William’s father died when he was three and the family decided to move to Cassville during the Land Lottery as the grandfather, Benjamin Wofford, drew a lot in western Georgia.

He attended Franklin College (University of Georgia), studied law, was admitted to the Bar and returned to Cassville where he opened a law practice. He was a slave owner, held property, raised livestock and farmed. He practiced a thrifty life and encouraged others to do the same.

He first served in the military as a cavalry captain where he commanded a battalion of Georgia mounted volunteers in the Mexican War from 1847-49. His unit saw combat on two occasions. He returned home to become involved in politics and was respected as a hero. He was first married to Julia A. Dwight and had four daughters of which only one survived. Much later in his life he married Margaret Langdon.

Wofford became a strong voice in the community and a visionary for its economic future regarding the route of the Western and Atlantic Railroad. He negotiated legislation for the road to be laid through Cassville; however, for the rerouting change to occur the state required the community to fund the expense. Later the citizens deferred and lost the opportunity to become a vital trade and transportation center.

As the winds of war approached, Wofford often spoke against disunion as did much of north Georgia. However, once the final vote was taken January 21, 1861, Wofford stood firmly with the state and its conviction to secede.

Following the vote, he returned home and found that all were preparing for war. Companies were already being formed. The Etowah Infantry, Cherokee Cavalry, Rowland Highlanders and many others were mustered into service.

Soon Wofford’s skills as an eloquent speaker and leader were needed to hold the troops together after a visit from Governor Joseph Brown and his stern demands regarding closing spirit shops and lengthening enlistments. Wofford made a trip to Atlanta to reason with the Governor, but with little success. Upon his return he made a grand and patriotic speech that convinced the troops to remain.

Wofford’s first major engagement was at the Battle of the Seven Days Campaign. When General Cobb was killed at Fredericksburg, Wofford assumed command and was promoted to Brigadier General. For a time he commanded Hood’s Texas Brigade. He was by many regards a “gentleman warrior” and participated in multiple engagements including: Yorktown, Second Manassas, Antietam, Sharpsburg, Overland, Battle of the Wilderness, Chancellorsville, Gettysburg and others. He was wounded twice: once at the Battle of the Wilderness and again at Spotsylvania. 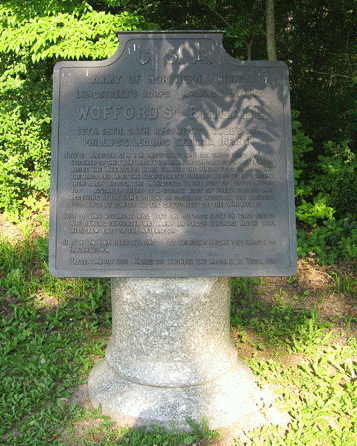 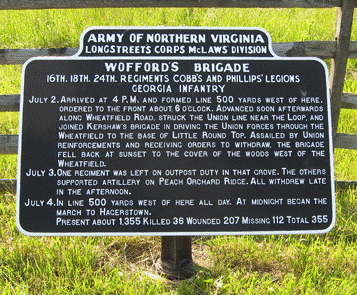 Wofford’s Brigade performed admirably at Gettysburg having fought July 2, 3, and 4th. His forces saw combat at the Wheatfield, Peach Orchard and at the foot of Little Round Top. Monuments to his Brigade commemorate action seen by the Georgia Infantry.

At the close of the war he had been charged to protect civilians from deserters, stragglers, bandits, looters and killer gangs who prayed on Georgians.  He was highly concerned with the lawlessness and starving families. After a desperate plea to President Davis, General Wofford requested to be reassigned to north Georgia and restore order. His request was eventually approved and the Department of North Georgia was established to restore order. He was instrumental in transporting a wagon train of corn through Union lines south of Dalton to starving civilians. The war was coming to an end and the Confederate government was in shambles. Wofford was compelled to negotiate terms with Federal troops from the position as an agent for the state of Georgia as President Davis was in flight and generals Johnston and Lee were cut off.

On May 12, 1865 Wofford surrendered the largest remaining Confederate troops east of the Mississippi of over 4000 men to Union Brigadier General Henry Judah in Kingston, Georgia at the McCarvey-Johnson home on Church Street.

Following the war General Wofford continued to bring relief to the suffering populace of north Georgia and was encouraged to enter politics. He was elected to Congress and promoted southern change. He lobbied on the behalf for Confederate veterans to receive tax exemptions and reliefs for widows and orphans. He is credited with reorganizing the Cartersville Van Wert Railroad.

Wofford worked to abolish the convict lease system and said that it was worse than slavery. He rose in the legislature to defend Georgia and opposed the emerging racism slander that eventually led to the “Jim Crow” laws. He also spoke out against the perception that blacks were uneducated and should not have a voice in state affairs. He advocated that blacks had been trained to Christianity and had become civilized. Wofford pointed out that the Georgia Legislature had taken steps to make education an equal privilege. He went on to say that “we are making a great experiment and we should stand up to what is right.”

Wofford was a generous man and often made many local contributions from his own resources. One of which was the donation of a parcel of land for the purpose of a school that was called the Wofford Academy.

He died May 22, 1884 and is buried with his family in the Cassville Cemetery beside some 300 unknown Civil War soldiers.

One of the Most Daring Men, Gerald D. Smith
History of Bartow County, Lucy Cunyus
J. B. Tate, Interview September 12, 2014