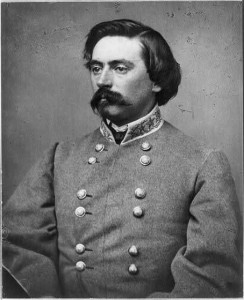 Pierce Manning Butler Young was the son of Carolina parents, Dr. Robert Maxwell Young and Caroline Jones both descendants of Revolutionary War patriot families. Pierce was born in South Carolina, but raised in Cass County, Georgia.   Dr. Young inherited his father’s South Carolina estate, but it was burdened with heavy debt. He found a difficult task to run the estate, collect debts owed to the estate and service debts due against the estate.

Dr. Young saw the western frontier (north Georgia, Alabama, Mississippi) and related Indian lands as a means to make a new start. After several unsuccessful speculation trips, beginning in 1833, he decided to settle his family in Cass County, Georgia during the summer of 1838.

Pierce was the youngest of four siblings (George, Robert, Louisa). From his birth Pierce was a sickly child and never remembered living in South Carolina. His father purchased 500 acres along the west bank of the Etowah River and hired a contractor from Rome to build a two story brick home with portico and two large white columns in the walnut grove knoll behind Pettit Creek.  Hence, this location inspired the name “Walnut Grove” given to the home. While Pierce Manning Butler Young never married, his sister Louisa did preserve the family lineage and the home remains in the extended family now owned by Ann Cummings. 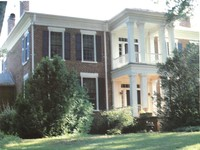 His early education was provided by private tutors until he convinced his parents of  ambitions to become a soldier. In July 1852, he enrolled at the Georgia Military Institute (GMI) in Marietta. He found life as a cadet to be lonely, highly disciplined and full of homesickness. However, these burdens shaped his character to become an outstanding military officer, leader, politician and Southern Gentleman. His performance soon gained him rank and respect becoming captain of a company. His congenial nature attracted cadets to him and this attribute would later endear soldiers to follow him.

While at GMI he was persuaded to apply for admission at West Point, but his petition to enroll was an up hill battle. He wrote numerous letters for consideration including Secretary of War, Jefferson Davis and Alexander Stephens. His family joined the letter writing campaign and on December 17, 1857, Pierce was notified by Congressman John H. Lumpkin that he had nominated him.

As an entering cadet at West Point, Pierce experienced the status of a lowly plebe and endured many insults and humiliation from upperclassmen and “Yankees.” He soon developed friends, one of which was future General, George Armstrong Custer and was reported to have roomed with him for some time.

Soon talk of war emerged and Governor Joseph Brown issued a message to the state legislature that the people of Georgia had a right of secession. Pierce began to question if he should remain at the Point. He felt much pressure as a Southerner while at the Academy and endured personal scorn and insults about the Southern way of life. Much discussion ensued about Southern cadets resigning or when to resign. Although the family was torn, Pierce made his decision to resign just three months from receiving his diploma and sacrificing his commission in the world’s greatest military. He accepted a disappointing appointment in the Confederacy as a second lieutenant. He and Custer continued to exchange letters of friendship and recognized each other through field glasses during the course of battles.

Pierce sought to enter the war in Virginia as the ole mother state would be the initial battleground. Colonel T. R. R. Cobb (Cobb’s Legion) asked him to be his adjutant. He accepted. Once the war began he rose rapidly in rank reaching major and commander of four cavalry companies. Soon he was promoted to Lieutenant Colonel of the Legion, brigadier general and eventually reaching the station of the youngest major general on either side.

He was known to sport a plumed feather hat and cheered his command during battle. His daring, fearlessness and leadership won him the esteem of the foot soldier as well as officers. He was awarded his 3rd star and was revered as the “Beau Brummel” of the cavalry for he was considered handsome in his uniform. He had a flare for making the most of his good looks and youth at social gatherings with the ladies.

On one occasion, General Young and General Jeb Stuart were having breakfast served by two attractive young ladies at a Brookland Mills home following the Battle of Gettysburg. A cannon shot exploded over the house causing the Confederates to abandon their breakfast. In a few moments Custer’s command arrived and asked who had been there. The young ladies said Young and Stuart.  Custer said, “Very well ladies, Young and I are friends. I will take his breakfast.” After the war, both reminisced over the matter and laughed over the incident.

Southern patriotism ran strong in the early months. Confederate soldiers could not be persuaded to take furloughs. As the war progressed, Pierce was wounded four times once near Harper’s Ferry from a bullet to the calf, again with a shallow chest wound at Brandy Station, a head wound at the battle of Slaughter’s Hill, and finally, his most serious wound at Hanover Courthouse. While lying on a cot and thought to be mortally wounded Captain Church ordered that a prayer be said on his behalf. As the orderly knelt and prayed, his words framed a soul that was suffering, likely to die and to be merciful to a wicked man. At that moment, Pierce interrupted and said, “Why don’t you say something good in my favor? The General said that such prayers reminding the Lord of his shortcomings, were not calculated to do a man in his fix much good.” He survived, but ironically his two brothers George and Robert perished in the war.

General Lee and the Confederate Army of Northern Virginia surrendered to Union General Grant at Appomattox Courthouse on April 9. General Pierce surrendered April 22 to General Edward Potter at Fulton Post Office. Prior to the end of the war General Pierce was recognized for his strategic brilliance in preventing 13,000 Confederates from being cut off and captured in Savannah.

Upon returning to Walnut Grove he found his home still standing, but in sever need of repairs. It became apparent that his house had been used by the Union as a surgical hospital. He also realized he and his family was penniless and would face a hard winter with little food as no crops were in the field. People only wanted to deal in Federal green backs or gold. They survived on agricultural enterprises.

Eventually Young found he was attracted to politics and successfully used his former West Point connections to support his acceptance within the Washington establishment. He became a champion of Southern rights and was elected as a Democratic Congressman in 1870. Later he was appointed as United States Commissioner to the Paris Exposition in 1878, became Consul General at St. Petersburg, Russia, then Envoy Extraordinary and Minister Plenipotentiary to Guatemala and Honduras. He died in New York, July 6, 1896 and is buried at Oak Hill Cemetery in Cartersville.