The Unknown Mastermind Behind the Great Locomotive Chase
By David Dundee 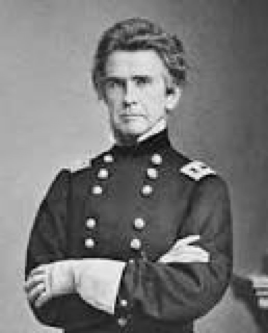 Even though I am not a historian but an astronomer I have always been interested in history. Plus I have always had a love of trains. So I stumbled on a story that involves both astronomy and trains.  I went to a lecture recently given by a local archeological society about Civil War activity on Hilton Head Island. It was on Hilton Head that the town of Mitchelville was established in 1862. This was a town for freed slaves and at its height a few thousand people lived there. It was named Mitchelville for Ormsby Mitchel, a major general for the Union army. Before the war he was an astronomer, and his nickname was “Old Stars”.  In fact, he had two towns named for him, as well as an observatory, some mountains on Mars and even a crater on Mars bears his name. So who was Ormsby Mitchel?

Mitchel was born in Kentucky in 1810. He graduated from West Point in the same class as Robert E. Lee. After graduating, Mitchel became an assistant professor of Mathematics at West Point.

Later, he moved to Cincinnati, passed the bar and became an attorney. He then joined the faculty of Cincinnati College becoming a professor of mathematics, philosophy, and astronomy. Ormsby Mitchel built the Cincinnati observatory, established the Cincinnati Astronomical Society, established a law school and in his spare time he was chief engineer of the local railroad. (Did this guy ever sleep?) He was a famous lecturer in astronomy; his lectures at first attracted a dozen or so people, but in a few years his lectures typically attracted over 2,000 people. His lectures were considered the most brilliant in America.

He moved on to Albany, New York as the astronomer at the Dudley Observatory. Mitchel then helped establish observatories for the United States Navy and at Harvard University. He also published the first monthly magazine in the United States devoted to astronomy.

At the outbreak of the Civil War, Mitchel enlisted and was commissioned as a brigadier in the Union army. He devised a plan to steal a train from behind enemy lines. (This is what became the Great Locomotive Chase that came through Northwest Georgia.) He and his troops seized Huntsville, Alabama, and he was promoted to major general. Ormsby was one of the principal planners of the Great Locomotive Chase.

His strategy was to have spies hijack a Georgia train and destroy sections of the Western and Atlantic railroad between Atlanta and Chattanooga.  Once this objective was accomplished he planned on invading Chattanooga from Huntsville. This train disruption would prevent Confederate reinforcements from reaching Chattanooga from the south. Unfortunately, the raid failed because of a determined railroad crew led by Conductor William Fuller and Engineer Jeff Cain. The relentless pursuit of the General was largely accomplished by three chase engines acquired in Bartow County. The thrilling story culminates with the locomotive Texas running in reverse to capture the fleeing General just before crossing into Tennessee. The Union raiders were soon captured and several executed including James Andrews, raid leader, with others eventually being exchanged as prisoners of war.

It was Mitchel’s in-depth knowledge of railroads that made him invaluable in planning the stealing of the locomotive and train in April 1862. It was also in 1862 that he assumed command of the community on Hilton Head Island, South Carolina.

Shortly after speaking at the establishment of the first free African Baptist Church on the island, he died of yellow fever in 1862. But the residents there held him in such high esteem, they renamed the community Mitchelville.