Long forgotten and faded from the county’s landscape is a former Civil War camp that once existed to guard the Etowah River Bridge. Governor Brown stationed select troops at key bridges to prevent Federal forces from destroying the state road. Safe from combat, these troops were controversial and became known as Joseph Brown’s Pets!

April 12, 1862 introduced the first Civil War intrusion to Bartow County in the form of the Great Locomotive Chase. It also provided a sobering reality to the vulnerability of Georgia’s vital Western and Atlantic Railroad (W&ARR) bridges. Once the mission was foiled, it became clear that the raider’s strategy was to burn bridges and disrupt rail traffic in order to allow Union forces an opportunity to invade the deep south.

Additionally, a second and lessor known raid was mounted by Union Colonel Abel Strieght to disrupt the W&A RR. He assembled a force or 1700 troops and planned to attack the railroad at various points between Chattanooga and Atlanta. The mission was to destroy the state road, prevent supplies and reinforcements from reaching Confederate armies in the northern battlefields.

One year later to the month of the Great Locomotive Chase, Streight’s Raid was launched from Sand Mountain southwest of Chattanooga on April 30th, 1863. However, Confederate Brigadier General Nathan Bedford Forrest’s cavalry intercepted Streight’s force. The initial battle at Days Gap was won by Streight’s forces, but in the following days his troops were surrounded, defeated and Streight was taken prisoner.

These two events were a chilling wake up call to Georgia’s Civil War Governor, Joseph E. Brown. It became apparent that the W&ARR was becoming a target and needed protection. The W&ARR was of special interest to Brown, not only for the war effort, but because he was from Canton in northwest Georgia and had massive personal holdings in land, mineral rights, mining and other ventures that depended on the railroad. As a result, he acted on his gubernatorial status as president of the state road (W&ARR) and established the Georgia Bridge Guard.

Governor Brown had previously defied Jefferson Davis and the Confederate government by establishing the controversial Georgia State Line Army. It was mustered from legislative conscripts, held in reserve and intended to defend the state at the discretion of the Governor. He along with other southern governors, felt justified in holding back a percentage of troops under the sovereignty of state’s rights and authority of his office. Even though the Confederate Congress gave President Jefferson Davis full control of the army, Brown continued to hold back a portion of Georgia troops that he reclassified for state defense. Governor Brown held little confidence in President Jefferson Davis’ Confederate administration based in Richmond, Virginia. Brown was not the only governor to distrust and considered the administration to be less competent and biased. He eventually succumbed to pressures of Jefferson Davis and relinquished the State Line to the Confederacy for action on the battlefields.

Feeling the threat of further bridge attacks Joseph Brown on February of 1863, authorized two regiments known as the Georgia Bridge Guard. Men were recruited from counties and communities that the state road serviced. They were eventually assigned to Camp McDonald in Big Shanty for training. Once training was completed they were deployed to Bartow County at the Etowah River Bridge on the WWRR and Kingston to guard the Rome Railroad connection to the WWRR.

According to General Orders 11, issued on May 20, 1863 the first and second guard companies were named Camp Foster for General Quartermaster Ira R. Foster and Camp Whitaker for Commissary Officer General Jared I. Whitaker. Camp Foster was positioned on the Etowah River near the Etowah Station with the nearest telegraph being in Cartersville.

The 1st regiment, commanded by Colonel E. M. Galt was named the Bartow Blues. Company F of the Regiment was assigned to the Etowah Station River Bridge. It is uncertain where the camp was precisely pitched, however, records reflect that the company consisted of approximately 150 men. Likely it was not a walled stockade defense type structure, but more of a field tent camp.

A force of this size would have required a rather level terrain near the bridge to provide lodging and drill space for parade grounds. According to muster rolls Company F, of the First Regiment, Georgia State Line was under the command of Captain Elihu G. Nelson. The company consisted of 15 officers and 138 privates. (See appendix A)

Speculation suggests the likely camp site may have been positioned west of the 1860’s W&ARR tracks and south of the river in what was then called McGuire’s Curve. The camp may have involved an old wagon bridge road that ran parallel to the tracks and current day US Highway 41. Railroads of that day required enormous amounts of wood to fuel the locomotives. Forests were typically cut down for great distances on either side of the roadbed leaving vast cleared spaces. (McGuire’s Curve was straightened in 1944)

While not mentioned in the following two maps, the author attempts to locate Camp Foster from information gathered in various sources and offers a reasonable possibility. 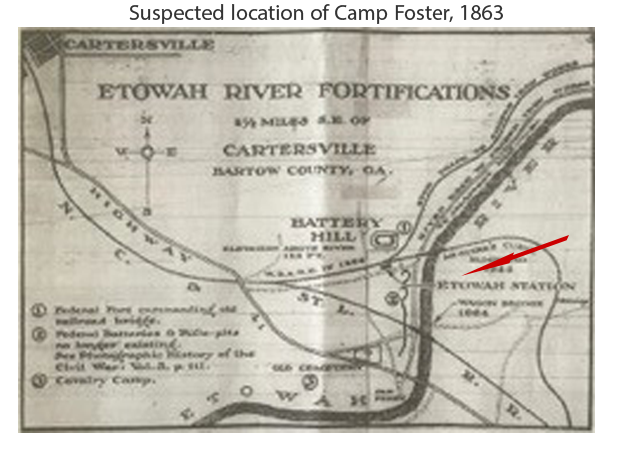 According to a May 20, 1864 field report the 38th Alabama Regiment passed through Cartersville, crossed the river bridge and camped at Etowah Station. They deployed pickets until the 24th before moving to New Hope Church.

Following General Johnston’s retreat from Cassville across the Etowah in May of 1864, Confederates burned the bridge to prevent pursuit by Sherman’s army. Later, Federal forces rebuilt the bridge and installed a cannon firing battery on the northeast side of the river above the bridge on high ground. This location is referred to as Fort Bartow. Trenches and rifle pits were reoccupied by Federal troops or new ones dug on both sides of the river. This Battery is referenced in subsequent Federal maps, but likely not the primary site of Camp Foster. 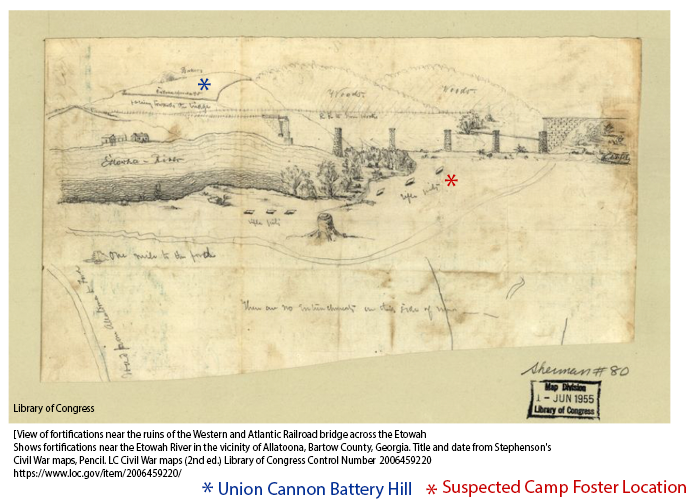 During the War of Northern Aggression, many camps were established in the area to train troops. Two of the largest were Camp Felton, near Cartersville, home to Smith’s Legion, among others, and Camp Foster at the Etowah River Bridge near Etowah Station. The 1st (Galt’s) Regiment are among the troops trained

During the Battle of Jonesboro Confederates were captured carrying documents that referenced Camp Foster regarding camp reports and muster rolls. Additionally, records associated with the Bridge Guard mention that the Georgia State Line Army operated a hospital in Cartersville and three other camps were in Bartow.

It is likely that the pitched camp was located in the vicinity south of the riverbank in an open field that provided space for a large force of troops with easy access to the bridge. The site would have benefited from the old wagon bridge road crossing the river to Cartersville. The open area would have accommodated a space for tents and formation drills.

A possible explanation to the camp’s fate is that invading Union forces likely occupied the trench works, gun positions and bivouac quarters. Later references to this area were known as the Federal Fort or Fort Bartow. As a result, Camp Foster’s identity was lost over time and its footprint is unclear.

Scant records also mention that Bartow was the site of Camp Felton, Camp Morrison and a cavalry unit. While little information is found on these camps, it should be paramount that we continue to strive and account for these forgotten or little known historic sites.

Local historians agree that there is not sufficient information to conclusively determine the site of the Confederate flagpole, but agree that this proposal is the strongest case for the site of Camp Foster. 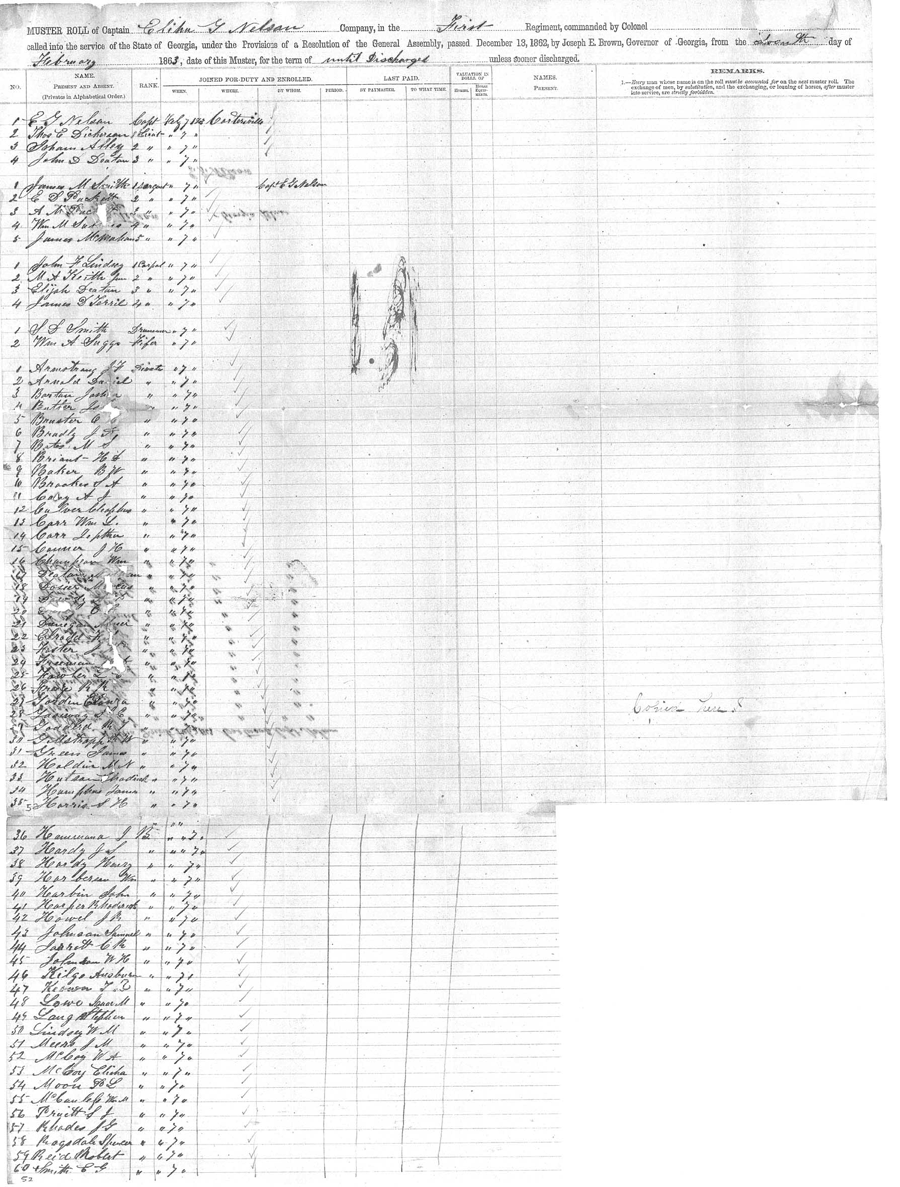 The Intelligencer, “Report of the Adjunct and Inspector General of Georgia,” November 22, 1863

The war of the rebellion: a compilation of the official records of the Union and Confederate armies. ; Series 1 – Volume 38 (Part III) Page 840.

CSA trenchworks were once located along the north bank of the Etowah River along River Road towards town, destroyed when the railroad and US 41 were later re-routed. A strong CSA work was located on the south bank of the river at the old railroad bridge.

A Union redoubt built to protect the old railroad bridge over the Etowah River. A state marker locates the site east of town, east of the present US 41-GA 3 bridge.