This hamlet, sometimes known as Grizzleville, surfaced as the result of a remarkable man who was in creditably productive in spite of becoming blind at the age of five years old. George Grizzle injured his eye with a knife when opening a bag of onions. An infection set in and caused blindness in both eyes, but launched a folk-style home builder with unbelievable carpentry achievements. 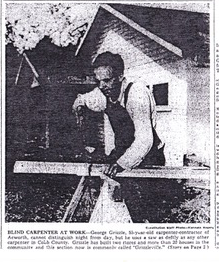 George was one of six children born in 1890 to James and Mary Grizzle. The family moved to a farm in south Bartow County in 1912. Here George met his future wife of 59 years, Pearl Biddy and they had four children. George became keenly adapt to his handicap and developed an uncanny skill as a country carpenter.

He began building sheds and out buildings and soon built his first house followed by several rental properties. In 1924, George purchased a piece of land and built a store with living quarters where he moved his family. As an extension of his store he established a “rolling store” or mobile vendor wagon and traveled the area selling goods during the depression.

Over the next twenty years, George Grizzle built two of these community stores, twenty homes and opened a cabinet shop. The center of Grizzletown was in south Bartow County at the juncture of highway 293 and Groover’s Landing Road just north of Acworth. Soon the area became widely known as “Grizzle Town.” George and Grizzle Town were featured in the 2014 Spring issue of Georgia Back Roads, November 1946 Ripply’s Believe It or Not, and August 30, 1946 Atlanta Constitution Newspaper.

A sign recognizing Grizzle Town has been placed at Iron Hill Baptist Church.