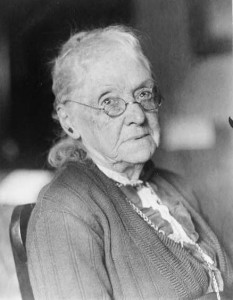 Educated in music and art, Rebecca Latimer graduated in 1852 from the Madison Female College in Decatur, Georgia, where she met her future husband, Dr. William H. Felton, at her graduation exercise. Married the following year in Decatur, Rebecca returned with her new husband to his father’s farm on the Tennessee Road outside of Cartersville, Georgia. Felton’s full-time exposure to politics began in 1874, when she aided in her husband’s successful campaign to Congress as his advisor and political strategist.  Finding her niche, Felton became an outspoken opponent of New South Democratic leadership, and a strong proponent of and a leader in the women’s movement, and in other progressive reform movements such as education and temperance. Later in 1912, she served as delegate and state chairman of the woman’s auxiliary of Theodore Roosevelt’s Progressive “Bull Moose” party in Chicago.

Dr. Felton died in 1909, and Mrs. Felton moved from the farm into the Cartersville town proper, to a home on the corner of Leake Street and South Avenue. Felton published her “Memoirs of Georgia Politics” in 1911, “County Life in Georgia in the Days of My Youth” in 1919 and “The Romantic Story of Georgia Women” in 1930, shortly before her death. As a columnist for the Atlanta Journal for twenty-eight years, Felton contributed various articles under the titles “Mrs. Felton’s Timely Talks” and “The Country Home”, their format being a cross between a modern “Dear Abby” and “Hints from Heloise”.

In 1922 Felton received an honorary doctorate from the University of Georgia, and on November 21 of that year, was further honored with the unique distinction of being sworn in as the first woman United States Senator,  an appointment by Georgia Governor Hardwick to fill the vacancy left by the death of Senator Tom Watson. Rebecca, age 87, took her oath of office at the courthouse in Cartersville prior to her departure to Washington DC,  attending two sessions of the Senate before relinquishing her seat to Senator Walter F. George following his special election. Feared, respected, and admired during her lifetime, Rebecca Felton remains a complex historical study for scholars almost a century after her death on January 24, 1930.