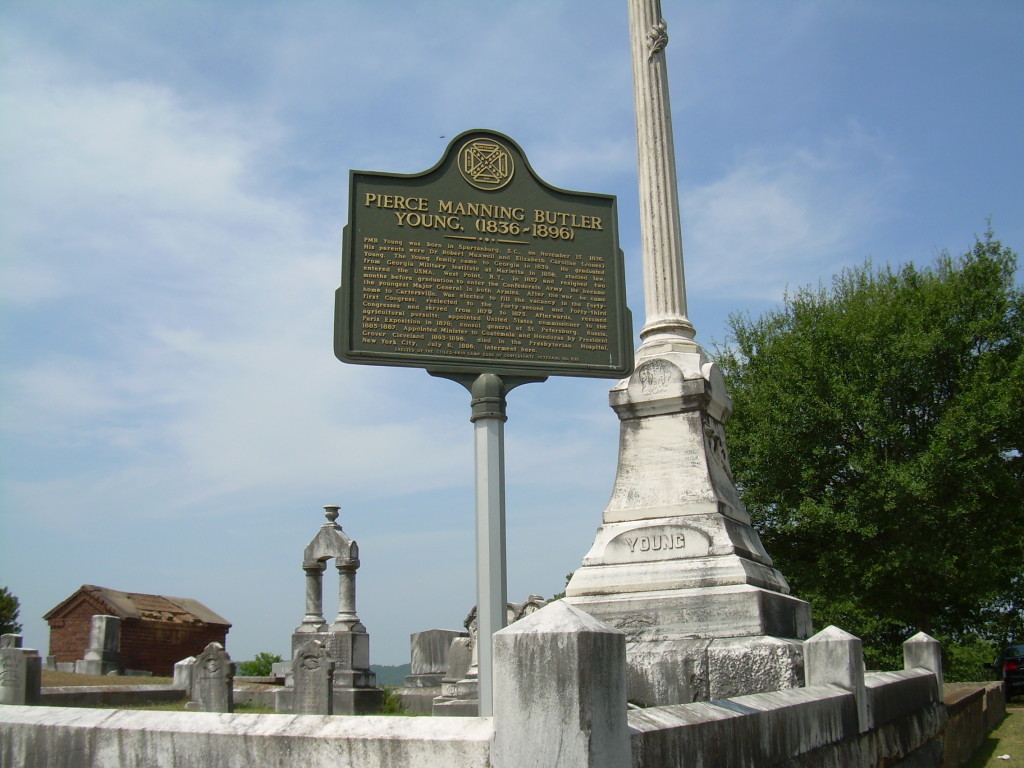 Pierce Manning Butler Young came to Cass County, now Bartow County, at the age of three. As a young boy, he received private tutoring before entering the Georgia Military Academy at age 14, graduating with honors. He then received an appointment to the U.S. Military Academy in 1857, making many lasting friendships with men who would become his foes in battle just 4 years later. One of these friends was George Armstrong Custer, his roommate, who unlike Young would fight for the Union. Young resigned from West Point his senior year following Georgia’s secession. He immediately enlisted in the Confederate Army as a second lieutenant in March, 1861. Young  quickly rose to the rank of Lieutenant Colonel of Wade Hampton’s Legion and the command of its cavalry. Described as “dashing and gallant”, Young often displayed forceful military bearing charging ahead of his troops in an attempt to capture a stronghold. Young is reported to have said,

“I’ll be a major general or in Hell in half an hour.”

Wounded in three separate battles, Young was distinguished for “remarkable gallantry” during the Virginia and Maryland Campaigns, and was promoted to brigadier general in 1863. A year later he was promoted to major general when he returned to Georgia to fight against Sherman’s army. Young is credited with being the youngest major general to serve in the Confederate Army.

Following the war, Young returned to his plantation home in Cartersville, Georgia, “Walnut Grove,” where his family had moved in 1839. Entering politics, Young allied with the New South Democrats, and in 1868 became the first Democratic congressman from Georgia to be seated after the war. While in office, Young served on the Military Affairs Committee and the U.S. Military Board of Visitors. After serving three terms in Congress, Young was unseated by William Felton, in 1874. Young represented Georgia in the Democratic conventions of 1872, 1876, and 1880, and in 1878 served as a commissioner to the Paris Exposition. In 1885 Young was appointed consul general to St. Petersburg, Russia by Grover Cleveland, where he remained until 1887. In 1893, Cleveland appointed him minister to Guatemala and Honduras. His health failing, Young resigned in 1896 and died en route home from New York on July 6, 1896. As commander of the Georgia Division of the United Confederate Veterans at the time of his death, Young was laid to rest with full military honors at age 59.