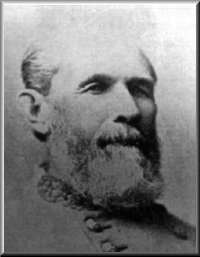 William Tatum Wofford’s father died when he was only three in Habersham County, Georgia. His mother would go on to raise him and her two daughters in Cass County, Georgia teaching him the noble traits and fine impulses which distinguished his long career. William would  graduate high school in Lawrenceville, Georgia at the Gwinnett Manual Labor Institute before studying law in Athens, Georgia. He was admitted to the bar in 1845 and established his law practice in Cassville, born in 1847, he raised a company of cavalry and went to Mexico to join in the Mexican-American War raging between our country and theirs. For his service in Mexico, Wofford was complimented by a resolution of the Georgia General Assembly in February,1850. Several months prior, in October, 1849 Wofford was elected to the Georgia House of Representatives, where he served for two terms and in 1853 was honored by that distinguished body being elected Clerk. Wofford served as a delegate to the Southern Commercial Convention in 1857-58, and worked to delay Georgia’s withdrawal from the Union as a delegate to the 1861 Secession Convention. In 1859, Wofford was united in marriage to Julia A. Dwight of Murray County, Georgia. Four daughters would be born to her, the three eldest dying as infants.

When Georgia did secede, Wofford volunteered for service and was commissioned a colonel in the Eighteenth Georgia Regiment, taking part in the campaigns around Richmond in 1862. The next year he succeeded to the rank of Brigadier General in command of a brigade composed of the 16th, 18th, and 24th regiments and Phillips’ and Cobb’s legion. Wofford would distinguish himself throughout the war in such major battles as Second Manassas, Antietam, Fredericksburg, Chancellorsville, Gettysburg, Spotsylvania and the Wilderness, being wounded in both the latter two. On January 23, 1865, General Wofford, by the request of the authorities and people of Georgia, and by his own desire, entered upon duty as department commander in North Georgia. His duties both before and after Robert E. Lee’s surrender were primarily to protect citizens from marauders of both armies and to supply food and clothing to destitute families. On May 12, 1865, Wofford made the last surrender this side of the Mississippi at Kingston, Georgia  to General Judah, commanding troops at Dalton. Wofford then negotiated the disbursement of 30,000 bushels of corn to the starving people of North Georgia.

In 1865, he was elected to Congress, but was not seated as Georgia was yet to be considered part of the Union. After an unsuccessful run for governor in 1871, Wofford served as a Democratic elector in 1872 and 1876 and as a delegate to the state and national Democratic conventions in 1876. Opposing the New South philosophy of industrialization during the 1870’s, Wofford campaigned for Independent congressman William Felton, with whom he had served in the legislature in the 1850’s. As a leader of the Independent bloc that reorganized state government and reduced expenditures, Wofford championed an adequate school system, creation of a juvenile reformatory, confederate pensions and protection of black suffrage in Georgia. He also, like Felton, opposed the convict-lease system. General Wofford quietly passed away on May 22, 1884, survived by his second wife, Margaret Langdon Wofford, who he married in May, 1884.