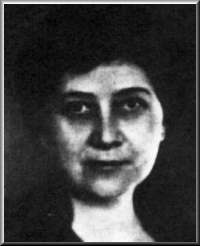 Corra Mae White Harris’s national acclaim as a writer began with an article she wrote in 1899, rebutting northern criticism of lynching in the South. The provocative article, which sparked spirited debate, began a ten year association with the Independent, a New York journal. Corra’s writing eventually evolved from articles, stories, and book review to novels, fourteen of which were published as serials in magazines such as Saturday Evening Post and Ladies Home Journal. The best of these, and the one for which Corra is best known, is A Circuit Rider’s Wife, a loosely based, semi autobiographical account of her first year with her husband. The novel was made into a movie, “I’d Climb the Highest Mountain,” in 1951.

Corra Mae White was born in 1869 on the family plantation in Elbert County, Georgia. She attended Elberton Female Academy but never graduated. As a writer, she was self taught.

Much of Corra’s writing was influenced by the people and circumstances in her life such as her alcoholic, irreverent father whom she adored, a humorless, devout Christian mother whom she admired, and a husband who encompassed the characteristics of both. Corra married Lundy Harris, a Methodist minister and educator, in 1886 at age seventeen. Together they moved to Hart County, Georgia where Lundy served a year as a circuit rider or traveling preacher, then to Decatur, Georgia for a year’s pastorate, and finally to Emory at Oxford College where Lundy taught Greek for ten years. Corra gave birth to three children, loosing one at birth and another during early childhood. In 1902, largely through Corra’s influence, Lundy was appointed assistant secretary to the Methodist Board of Education in Nashville, Tennessee. His fragile emotional health continued to deteriorate, and in 1910 he died of an overdose of morphine while visiting friends in Pine Log, Georgia.

Following her husband’s death, Corra moved to Pine Log in Bartow County, Georgia where she purchased an abandoned Cherokee period Indian cabin, which she called “In the Valley,” and spent the remainder of her life developing it into one of the most remarkable estates in northwest Georgia. Here Corra continued to write, producing over twenty books and novels, including the autobiography My Heart and Home. During World War I, Corra served as the first female war correspondent for the Saturday Evening Post. Though largely forgotten following her death, scholars are now taking a second look at this Georgia author, whose works, once popularly received, reflect the life and times of a Southern woman in the post Civil War and turn of the century South. Corra Harris died of a heart attack in Atlanta in 1935, and is buried on her estate beneath a stone chapel she designed and had built for that purpose. Privately owned for many years and meticulously restored by Jodie Hill, native of Bartow County and long time resident of Cobb County, “In the Valley” was generously donated by Hill to Kennesaw State University in 2009. In 2020 the property was transferred to Bartow County and is now the property of the Etowah Valley Historical Society. In the Valley remains a monument to one of the South’s most prolific writers, and a legacy to Bartow County.