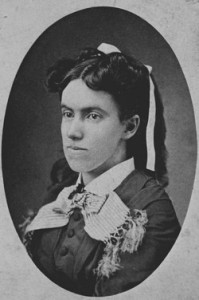 Lottie Moon, a Baptist missionary who served in China. Named for her, the Lottie Moon Christmas Offering for Foreign Mission raises more than $20 million annually.

Destined to become a pioneer in the field of missionary service, Charlotte Diggs “Lottie” Moon was raised on the family plantation learning the finest traditions of southern culture. Her family’s wealth supported educational advantages far above the standards of her day. Her Christian faith was made ever stronger while attending the Albemarle Female Institute in Charlottesville, Virginia. It was there that she made a public profession of faith during a campus revival and was later baptized, becoming a member of the Charlottesville Baptist Church. Upon graduation in 1861, she was one of  five in her class to be awarded a Master of Arts degree, the first of its kind awarded to women by a Southern institution. Though she had thoughts of entering the mission field, single women missionaries were prohibited, and Moon reluctantly settled into a teaching career. She found first a private tutoring position in Alabama before leaving in 1866 for a teaching position in Danville, Kentucky. There she also served as an assistant to the pastor of the First Baptist Church. A lasting friendship developed at the female academy in Danville between Lottie Moon and Miss Anna Safford, which lasted a lifetime. 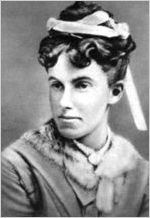 In 1871, Moon came to Cartersville, Georgia at the invitation of her cousin, Pleasant Moon, along with her friend, Anna Safford, to own and operate the Cartersville Female Seminary. The school, located near the Presbyterian Church, proved successful. Moon soon transferred her membership to the Cartersville Baptist Church, teaching Sunday School and assisting the church pastor, Dr. R.B. Headden. Some thirty two years later in 1903, Dr. Headden was quoted saying:

“there was a general meeting at Adairsville, Georgia. It was a rainy spell and few of the brethren were there. During the morning session the moderator was asked for the brethren to discuss… is it binding upon us of today to pray for God to send forth laborers into the harvest? The brethren there prayed for laborers, and pledged themselves to continue to pray. The next Sunday I preached from that text. On the next to the front seat sat a young woman. She and another young woman were teaching school together. She was a Baptist, and her fellow co-worker was a Presbyterian. In the fall of 1873, these two women offered themselves for the foreign field, one to the Baptist Board and the other to the Presbyterian Board. They were accepted and sent to China.”

The appointment of single women to the foreign mission field in 1873 was still controversial when Moon was accepted. Before leaving, the women of the Cartersville Baptist Church (later to be renamed First Baptist Church) organized a missionary society, now the oldest Baptist missionary society in Georgia, to aid in her support. The society remained in communication with Moon for the next thirty nine years, faithfully recording her letters in their meeting minutes. Encouraging Moon in her mission work and aiding her financially with offerings placed on the alter on Christmas Eve, the society’s unselfish devotion to her mission prompted Moon to write a letter to the Baptist Missionary Board in Virginia encouraging them to establish a Christmas offering for foreign missions. Renamed the Lottie Moon Christmas Offering for Foreign Mission in 1918, it has since raised more than $20 million annually.

At age 72, Moon was called back to the United States, having succumbed emotionally to the stress of missionary work in China, living in  harsh conditions which included famine, war and plagues. She was generous to the end, giving all the food and funds she had for famine relief. En route home, she died of starvation and dementia aboard ship on Christmas Eve, 1912, having never married.