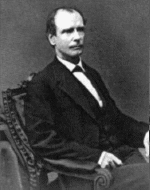 Educated at Phillips Exeter Academy and Dartmouth in New Hampshire, Akerman began his carrier in 1842 as a teacher in Murfreesboro, North Carolina.  The year 1844 found Akerman in Richmond County, Georgia establishing a new school. However within ten months Amos found himself with a tutoring position in Bath, South Carolina. He accepted the tutoring position offered by former Georgia Senator, former Judge and a former U.S. Attorney General in Andrew Jackson’s cabinet by the name of John M. Berrien in late 1846. This proved a wise decision as Akerman took advantage of Berrien’s law library reading extensively. Around 1848, Akerman traveled to Peoria, Illinois to study law in the office of A.O. and Al Merriman. Returning to Georgia and settling in Clarksville around 1850, Akerman began farming while continuing to study law. By October 1850, Akerman had passed the bar and began his new legal career in Clarksville before moving to Elberton, Georgia in 1856.

As the secessionist movement swept across the south, Akerman opposed Georgia’s involvement. He opposed extremists on both sides of the Civil War,  but joined the Confederate cause in 1863, as a private in the Third Georgia Cavalry of the State Guard. Rising to the rank of captain, Akerman became assistant quartermaster of the militia division under General Gustavas Smith. This placed Amos in the defense of Atlanta in September, 1864 and the gradual retreat in the face of Union General Sherman’s famous “march to the sea”. Akerman service would end in Augusta, Georgia during April, 1865, being furloughed indefinitely by Georgia Governor Joseph E. Brown.

Active in the Republican Party, he was elected to the Georgia State Constitutional convention of 1867. In December 1869 Akerman was appointed United States District Attorney for Georgia by President Grant in appreciation for Akerman’s devotion to his presidential campaign. Akerman had served as a Grant elector in 1868. Grant further rewarded Akerman with an appointment in June 1870 to serve as U.S. Attorney General. In that capacity, Akerman was the first attorney general to serve as head of the Justice Department, where he established the first investigative agency within the department, later the FBI. Zealous in his investigations into and prosecutions of Ku Klux Klan activities, under his leadership, Akerman’s office won over half the civil rights cases he prosecuted. Forced to resign as attorney general on January 10, 1872 after incurring the wrath of powerful railroad interests, Akermanwas offered a federal judgeship or a diplomatic appointment, which he turned down.

A controversial figure and strong proponent of equal rights for blacks, Akerman met with disfavor in his home town of Elberton Georgia when he assembled a crowd of blacks and attempted to lead then to the 1870 election polls. One month later, he moved to Cartersville, where the political and racial climate was more subdued, and established a lucrative law practice.

Stricken with rheumatic fever on December 16, 1880, Akerman died five days later at him home in Cartersville, leaving behind his wife, the former Martha Rebecca Galloway of Athens, Georgia, and seven children. He was fifty-nine years old. So well respected and admired was Akerman, that days before his death, members of the bar and others in Bartow County urged his appointment to fill a vacancy in the Fifth Judicial Circuit Court of Appeals –“although” the resolution stated, “every member of this meeting is a democrat.”