The Midnight Collision of the Chiefton and Senator

The Great Train Wreck of Sunday, September 1863, may be more of Emerson’s exclusive claim to Civil War railroad fame than the celebrated 1862, Great Locomotive Chase that once raced through the old iron ore mining community. Emerson was originally a wood stop along the Western and Atlantic road known as Stegall Station. It was initially a single boxcar depot named for Emsly Stegall a wealthy landowner, but later renamed for the Civil War Governor, Joseph Emerson Brown.

The northbound Senator, engine number 41, was transporting fresh confederate troops to Chickamauga, while the southbound Chiefton number 42 was evacuating wounded from the northern battlefields. In the haste of warring activities these two peacetime locomotives were pressed into evening service, but only to become silent victims of a fatal collision and eventually lost to history.

For Emerson and Stegall Station, the Great Locomotive Chase starring the locomotive General was but a fleeting non-stop moment in April of 1862 that added no credential to the ore rich community as it did in other towns and depots. But, the 1863 Great Train Wreck some 18 months later was a much more significant event that brought the reality of the Civil War to the heart of local residents.

The American Civil War was the first war to be fought on the shoulders of a railroad. Stegall Station (now Emerson) was on the lifeline of the Confederacy and saw heavy rail traffic between Atlanta and Chattanooga. Many of the state owned engines noted in the war traveled Western and Atlantic tracks through Stegall Station. Perhaps the most famous of those were the locomotives, “General and Texas.”

The Texas is now on display at the Atlanta History Museum and the General at the Southern Museum of Locomotive and Civil War History in Kennesaw. Following the Civil War the Texas was often assigned in Emerson to serve mining transport needs and other businesses. 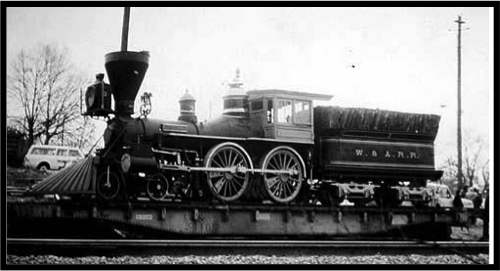 Southern rolling stock and rail lines were in poor repair in the final years of the war. Neither engine, Senator or Chiefton, was equipped for night running and should not have been in service. Lacking kerosene headlamps and little benefit of moonlight the two collided head on about midnight. The Senator was running behind schedule due to a previous derailment earlier in the day near Big Shanty (Kennesaw) and no message was telegraphed north to warn southbound traffic. Both trains were likely running at maximum speeds of 18 to 20 miles per hour during those years. The railroad bed, rails and cross ties could not support fast speeds and when combined with night running led to tragedy and loss of life.

The accident occurred in the dead of night in what is known as the deep bank cut a half-mile north of the community near the SR 293 Connector-Hamilton Bridge adjacent to what is now known as the old Dixie Highway. Both steam-powered engines, the Chiefton piloted by Mr. Howden and the Senator piloted by Mr. Schofield, were fueled by wood and water.

Local residents were awakened by the crash and rushed to the site. Bodies were strewn along the tracks, most were injured and many dead. Southbound soldiers were wounded from the gathering battle at Chickamauga and the violent crash killed and injured others on both trains. Residents were overwhelmed with rescue duties trying to respond for requests for water, blankets and first aid.

According to a personal 1930’s story related by Mrs. Laura Jane Duckett Wigley, to her great grandson, Don Monroe, she recalls the startling noise and events that followed. Her father worked for the railroad and recognized what had happened. Mrs. Wigley was a young girl at the time, but states…

“We went to see what had happened and discovered that, indeed, two trains had collided in the deep cut. The engines were lying on their sides and the rail cars were shattered in the bottom of the cut. There were many injured people in the wreckage and they were crying out for help and particularly water. We gathered buckets and pans and carried water up the road and down into the railroad cut. We learned from the survivors that the train coming from the north was loaded with wounded soldiers and the train from the south carried soldiers that were headed into battle. “

Casualty reports vary regarding the number killed and wounded from the collision. Personal letters about the accident cite confusing casualty numbers because they were reporting injuries by military units aboard both trains and not as a total of the event. Witnesses were inconsistent about who was injured as a result of the crash vs previously wounded.

The dead were buried in a small cemetery near the site. Nine days later the remains were removed to the Confederate Cemetery in Marietta. Only brief inscriptions on random head stones were inscribed indicating the date of death resulting from a train wreck. Estimates are unclear, but claim that 12 to 18 bodies were transferred. Sketchy reports on the event imply that the crash scene delayed traffic for one day before rail operations could resume.

Both engines were repaired, put back into service and eventually transferred by the state along with other rolling stock to a lease contract after the Civil War under Joseph Brown. Twenty years later the lease was transferred to the Nashville Chattanooga & St. Louis Railroad. The wartime Dixie Flyers were retired and sold off for scrap as was the fate of many engines to support WWI and WWII.

The wartime collision of the Chiefton and Senator was scarcely recorded and became a forgotten episode to the pages of Emerson history. However, the Great Train Wreck event, if considered in retrospect, deserves to be remembered and belongs exclusively to the history of Emerson and Stegall Station.

Note: It should be noted that Chieftain is spelled differently in several accounts, but is spelled as Chiefton in the W&ARR inventory schedule between 1843 and 1872.