Bartow County has been called the Empire County of the State as a result of the lush Etowah River watershed. Its location, transportation, wildlife, natural resources and climate are ideal for agriculture. Perhaps the obvious treasures are the Etowah River, rich ore deposits, fertile land and timber.  Bartow rests within three of five geologic regions in Georgia: Piedmont, Blue Ridge and Valley & Ridge. 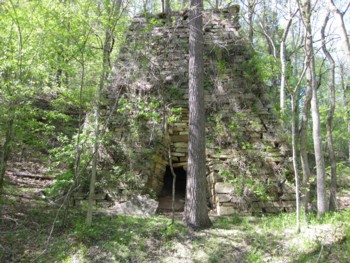 Early gold prospectors quickly discovered iron ore in the late 1820s and early 1830s. This drew entrepreneurs to Cass County for secondary raw products that would be extracted from a mining industry. Bartow County and Cartersville are labeled as the oldest continuing mining district in the United States, and active mining operations continue today. According to a 1900 geological report entitled, “Iron Ores of Georgia,” S. W. McCallie  states that the Georgia iron business began in Bartow/Cass County with the first stone furnaces on Stamp Creek. The industry later expanded to Polk and Floyd Counties. Click here to see how a stone furnace of this period operates.

The three primary ores to be most successfully mined in Bartow for profit are: barite, ochre and iron ore. Gold was found in smaller amounts, but was exhausted quickly. Mining in Bartow has been done traditionally by Open Cut or Open Pit methods even to present day. Most mining was done in ore banks with quickly laid railroad tracks installed to transport ores to the  Western and Atlantic Railroad mainline.  Dozens of mining companies have operated in Bartow County, but the primary company remaining today is New Riverside Ochre and is the oldest ochre and umber mining company in the Western Hemisphere since 1905. It is uncertain how much longer Bartow ores will last into the 21st century.

William Weinman established the PAGA barite mines in Bartow County. He pioneered a new method of marble milling to grind it into a fine powder which he patented and called, atomite. This and other works have led to the Weinman Mineral Gallery housed at the Tellus Science Museum.

There are 38 known caves in Bartow County that have been explored, mapped  and documented by the Georgia Speleological Society.  Kingston’s Salt Peter Cave, 2080 feet in length, is the largest and most well-known cavern in Bartow County. The mineral, salt peter, was mined from this cave and  provided the confederate armies with nitrate  materials to manufacture gun powder. Evidence in the Salt Peter Cave also indicates the Cherokee Indians first mined there. In the 1930′s wooden steps were installed at the entrance of the cave and a wooden floor was constructed in the great room where dances were held on weekends.

Perhaps the greatest loss to natural caves in Bartow County is that of Ladds’ Mountain located on Highway 113. At one time it held a spectacular cavern and the complex would have been the longest in Bartow County. History reveals that half the mountain has been blasted and quarried away for its mineral content. Prior to its mining the mountain had a single cave entrance with nearly 2000 linear feet of passage. As a result of mining, it now has twelve known cave entrances. Historic evidence indicates Native Americans knew about the passages and used them for burial sites. Native Americans also built a 2000 lineal feet oval stone ceremonial site on the summit of the mountain. Archaeological studies have uncovered that the Ladds’ cave held a rich deposit of artifacts and bone fossils including mastodon, camels, horses, saber tooth tigers and human remains. By the late 1930′s the oval stone wall was dismantled and sold for road construction material. Click here to see cave and geological map of  Bartow County.

Water-power has also been a great resource because of the Etowah River. Rolling mill and grist mill businesses (metal stamping or grain grinding) were driven by water wheel, mining was powered by Stamp Creek and other streams. In the late 1940’s the Corp of Engineers built Allatoona Dam in accordance with the Flood Control Acts of 1941 and 1946. This project was necessary to control flooding in Rome, Georgia and generate electrical power for the region. Water recreation became a by-product of the lake.

Another benefit to the area was the former Georgia Institute of Genetics that was located and operated on Highway 20 next to the current Georgia Highlands College. Here a pedigreed cottonseed was developed that was highly productive in yield compared to other counties growing cotton.

1. The Tellus Museum houses two confirmed cases of a meteorite that hit a house in Bartow County and else where in Georgia.

3. Mining at Ladd’s Mountain once provided limestone and “dolomite” that makes baking powder and the gas that gives Coca Cola its fizz.

5. The highest point in Bartow County is Pine Log Mountain at 2400 feet.