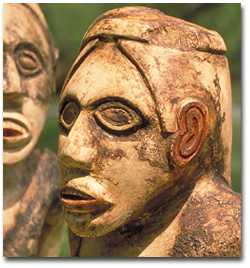 Modern day Bartow/Cass County falls within the Etowah Valley of northwest Georgia which grew out of the pre-historic Mississippian period and Woodland cultures. These periods are mostly undocumented, except for geographical traces and artifacts that remain of these previous civilizations. The most tangible of these remains in Bartow County are the famed  Etowah Indian Mounds (Tumlin Mounds) to have been built by the Mississippian culture. The county was once dotted with a network of mounds; but because of erosion, farming, flooding, road construction and development, these mounds have disappeared. Most sites or villages are found on waterways such as rivers and creeks along the banks. The larger communities typically built defensive palisades (vertical timber walls) and moats (water filled ditches flooded by the creeks or river) around the settlements.

The mound area still reveals evidence of the native civilization including: three earth mounds, defensive moat/ditch that surrounded the village, V- shaped river rock fish traps and artifacts contained in the museum. Among all the artifacts discovered at the Etowah Indian Mounds,  the most prized is a pair of carved marble statues.    These two effigies are figures of a male and female and likely used in ceremonial worship.  The primary temple mound is the tallest Indian mound in Georgia at 67 feet reaching over 7 stories high. Recent archaeological excavations suggest that these “mound builders” may have ancient origins to Mexico regarding mound construction, pottery, imagery and introduction of corn to this area. However, traditional academicians and archaeologists are slow to embrace this theory.

“Italwah” or Itaba pronounced today as “Etowah” is a Muskogee – Creek word meaning “town or trail crossing.” The chronology of this settlement covers three phases beginning in the Early Mississippian period of about AD 1000 to the final Mississippian phase of AD 1550.   It is thought that the peak mound construction activity was about AD 1250. During the decline of the Mississippian period, Spanish Explorer  Hernando DeSoto is recorded to have visited the mound area in 1540 near the Etowah River. 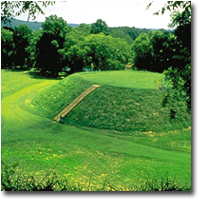 Following the demise of the Mississippian period, subsequent civilizations to inhabit Bartow County were the Creek and Cherokee Indians. The Creek are considered to be direct descendants of the Mississippian culture. The Cherokee eventually pushed the Creek southwest from Bartow County and settled the area introducing their culture and influence. “Hightower” was an alternate name used by the Cherokee for the Etowah River during the Cherokee occupation. This included a settlement across the river adjacent to the Etowah Indian Mounds.  The Mississippian period is often identified by pottery decorations that included: stamping, polishing, incision and painting designs. Lodging or housing is often confused with the tee pees of western plains Indians. Actually, housing was made of local materials including mud huts and was called wattle and daub construction.

With the arrival of Europeans, Native Americans severely suffered from the diseases brought by the explorers. Lack of immunity to European diseases eventually caused the greatest deaths to the Indian population and not warfare. The Cherokee were the most adaptable and best assimilated of all the Native Americans to the encroaching white explorers. They adopted white customs, converted to Christianity, developed an alphabet, practiced a democratic government and owned land. The Cherokee occupied the southeastern states and established their last capital at New Echota, north of Cartersville in Gordon County. The Brainered Missionaries opened a local school called, Etonee for the Cherokee children near Paga Mine Road. Later the name was changed to Hightower Mission.

The nation’s first gold rush was discovered in Dahlonega, Georgia. The vein of gold tracked southwest through Bartow County and into the heart of the fertile lands of the Cherokee Nation. Early settlers saw the potential of the area and demanded access. As a result President Andrew Jackson ordered the removal of the Cherokee to Oklahoma in 1837-1838. This removal became known as the Trail of Tears which refers to the emotional loss of home, bitter journey, trail deaths and betrayal. It is recorded that approximately 1500 Cherokees were removed from Bartow County.

1. The Etowah Indian Mounds were built in the Mississippian cultural (also known as Mound Builders) period prior to the Creek and Cherokee.

2. Sally Hughes, a Cherokee woman,  owned a very successful river ferry on the Etowah River between Cartersville and Emerson from 1820 and 1832.

3. The largest mound of the 3 remaining Etowah Indian Mounds is the tallest in Georgia. There were a total of 30 documented mound sites in Bartow that include among other areas Etowah, Leake, Pumpkinvine Creek, Raccoon Creek and Ladds.

4. Excavated Native American sites in Bartow County exceed 690 locations and is second only to Cherokee County with 702.

5. Native Americans grew three food plants that were often referred to as the 3 sisters: Corn, Beans and Squash.

6. Cherokees were held at a compound west of Kingston on the Floyd-Bartow line known as Fort Means prior to embarking on the Trail of Tears.

7. In 2010 an excavation uncovered a Mississippian site on highway 113 near Ladds Mountain considered older than the Etowah Indian Mounds. The site is known as the Leake Mounds site and is now a walking trail.

8. An Indian rock fort or ceremonial site once stood on top of Ladds Mountain, but was dismantled in the 1930’s and used as road bed fill to build highway 113.

10. The Etowah Indian Mounds were previously the property of the Tumlin Family who transferred the site to the state for a public historic park.

12. A Cherokee Indian and tribal leader by the name of Major Ridge from Pine Log became an advocate of relinquishing the Cherokee lands. He was later assassinated for signing the 1835 Treaty of New Echota.

13. Stand Watie, a tribal leader who lived at New Echota near Calhoun and reportedly in northern Bartow County became the only Cherokee Confederate General. He is noted to be the last Confederate General to lay down arms surrendering on June 23, 1865 some 75 days after General Lee surrounded at Appomattox.

14. Boyd Cave near Adairsville and Jordan Cave near Emerson are both reported to have been used by Native Americans as a hiding place for legendary Cherokee gold.