Hostilities among Native American tribes have been evident to historians, but they were not a significant part of Bartow recorded history. Early north Georgia settlers are not known to have had frequent skirmishes with Native Americans, but were organized into Militia Districts to protect against Indians. These militia zones emerged from colonial days and lost their importance after the Cherokee Removal.

Northwest Georgia was largely immune to the American Revolution because colonists had not arrived. However, Bartow County is known to have about six patriot grave sites. There is minimal documentation regarding Revolutionary War activity in Bartow; but according to a May 29, 1830 article in the Cherokee Phoenix newspaper, there are accounts of General Pickens of South Carolina and General Clark of Georgia marching soldiers into the Cherokee Nation. They reached the Hightower villages and burned out the Cherokees and Creeks as retaliation for assisting the British.

Modern warfare using photography, railroads and telegraph activity in Bartow County is not a reality until the American Civil War.

The debate over secession was a fierce political contest among delegates. Cass County voted overwhelmingly “Nay” (No) on the issue of disunion at the 1861 State convention, but accepted the inevitable outcome and joined the Confederacy. Cass County at the time had been so largely populated by residents from South Carolina that many rallied to join the Confederacy even before the vote was taken. The irony of this action resulted in Cass County suffering greater destruction than any other north Georgia County at the conclusion of the Civil War.

Bartow produced two prominent Confederate generals. General William T. Wofford was raised in Cass County and studied law at the University of Georgia, later serving in the Georgia legislature. He recruited a company of men and fought in the Mexican War. When Georgia seceded from the Union, he was commissioned a colonel and fought in significant battles. Later he was advanced to Brigadier General. At the conclusion of the war he surrendered the last Confederate troops east of the Mississippi at Kingston, Georgia.  He is buried in Cassville.  General Pierce Manning Butler Young grew up in Cass County and attended West Point in 1857. His roommate was General George Armstrong Custer. Young resigned at West Point and joined the Confederacy where he became a lieutenant colonel and eventually promoted to major general and considered to be among the youngest generals on either side of the blue or gray.  During his service he was wounded in three separate engagements. He was described as “dashing and gallant.” Following the war he enjoyed a diplomatic career and served in St. Petersburg, Russia.  He died in 1896 at age 59 and was buried in Cartersville at Oak Hill Cemetery with full military honors.

As the war unfolded the Georgia legislature voted in 1861 to change the County Seat’s name from Cass County to Bartow County in honor of Francis Bartow (Savannah) who was the first Confederate officer killed in the Civil War at the first battle of Manassas, Virginia (Bull Run).

The 1861 outbreak of the American Civil War did not touch Bartow County for another twelve months. The first Civil War activity to occur in Bartow County was the famous “Great Locomotive Chase” on April 12, 1862 and is considered to be where the “Heart of the Chase” unfolded. Ironically, on this same date, one – year prior, is when Confederates fired on Fort Sumter in the Charleston S. C. harbor beginning the Civil War. The Great Locomotive Chase earned Union Raiders our nation’s very first Congressional Medals of Honor, making Bartow County a piece of that history.

As the war unfolded, the Georgia legislature voted in 1861 to change the county seat’s name from Cass County to Bartow County in honor of Francis Bartow (Savannah) who was the first Confederate officer killed in the Civil War at the first battle of Manassas, Virginia (Bull Run).

General  William Tecumseh Sherman amassed forces of over 100,000 troops in Chattanooga and moved into northwest Georgia. He followed the Western and Atlantic Railroad (WARR) to serve as his supply line and set up headquarters in Kingston, May 1864. Here he received his famous orders to March to the Sea. While in Bartow County, Union troops burned several sites throughout the county. The Etowah Rolling Mill and Town was destroyed and burned in May 1864.  On November 5, Union forces from the Fifth Ohio Calvary burned Cassville in retaliation for confederate guerrilla activity resulting from a vicious attack on an ambulance and nine soldiers.   Neither of the towns were ever rebuilt and the county seat was moved to Cartersville. According to Lucy Cunyus, Union troops did considerable damage to Cartersville, but largely due to the railroad route through town, RR depot, a few spared homes and churches, Cartersville was able to rebound. A similar act of compassion was rendered in Stilesboro when Sherman spared the Stilesboro Academy as a result of West Point motto written in Latin above the auditorium door that read, “ Deo ac Patrae MDCCCLIX.” (God and Country, 1859)

Bartow County became a bloody battleground between May and November of 1864. The County saw various skirmishes, but significant engagements were at Adairsville, Kingston and Cassville. The Battle of Allatoona Pass south of Cartersville in October marked the last notable battlefield hostilities in Bartow County. The Battle of Allatoona is known for two famous quotes. A Needless Effusion of Blood and “Hold the fort!” Sherman ordered Union forces to hold the Allatoona Pass position until he could arrive from Kennesaw Mountain with reinforcements. 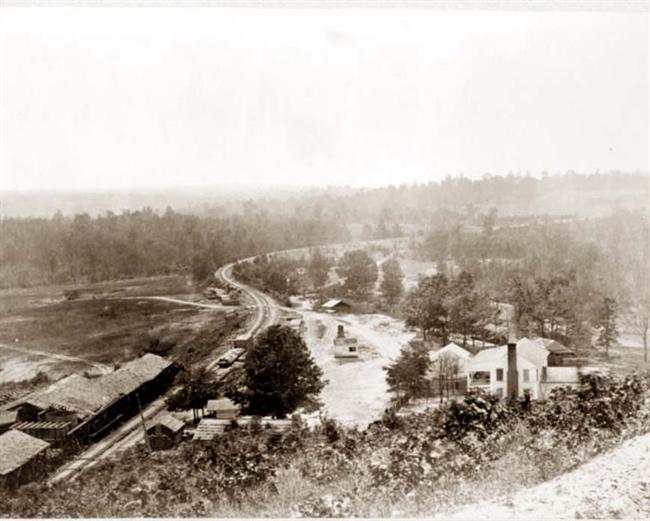 The commanding officer signaled that he would “hold the fort.” It became the inspiration for the familiar gospel hymn by Evangelist Peter Bliss, “Hold the Fort.” Confederate General Samuel G. French is remembered for the summons he issued to the Union commander General John M. Corse to surrender the fortification and avoid a “needless effusion of blood.” Corse replied he was prepared for the “needless effusion of blood” and the battle commenced.  At the end of the day losses totaled 1,505 Americans from both sides. The Confederates eventually abandoned the assault as Union reinforcements were imminent.

At the close of the Civil War in Bartow County conditions had severely deteriorated. Lawlessness was rampant, families were disjointed, starvation  raged, crops were destroyed, shelter was scarce, wide-spead illness and no civil order. Remnants of the Southern Army were nothing more than deserters,  stragglers, bandits and alleged scouting parties or rouge guards that more often robbed and scavenged the locals. General William T. Wofford was eventually charged to restore order with his North Georgia Guard and provide relief aid to northwest Georgia. He established headquarters in Kingston which eventually served as the final surrender. On May 12, 1865, he surrendered to Union General H. M. Judah  releasing over 4000 Confederate troops east of the Mississippi. Here Confederate soldiers received their pardons and paroles to return to civilian life after taking an oath of allegiance to President Andrew Johnson.

Bartowians have faithfully responded to all our nation’s call to military duty. A significant military figure of the 20th century was Colonel Carl Boyd from Adairsville. He served in France in 1917-1919 (WWI) as General Pershing’s aide-de-camp. He died in France on February 12, 1919 and is buried in the American cemetery in Suresnes, France. His assistance to Pershing was so valuable that the French even decorated him, Chevalier of the Legion of Honor. Bartow citizens have served in WW I, WW II, Korea, Vietnam, the Gulf War and conflicts in the middle-east with pride and patriotism.

2. The famous painting of General Lee and General Jackson entitled, “The Last Meeting,” was painted by Bartow resident, Everett B. D. Julio. He is buried at Springbank north of Kingston.

3. The Clayton-Mooney house was used as a Civil War hospital after the battle of Allatoona Pass in November 1864.

4. The Georgia legislature changed the name of Cassville to Manassas in 1861. However, the Federal Government and US Postal Authority never recognized the name change.

5. The rolling mill and foundry community of Etowah was destroyed by Union troops in 1864. Later its ruins were covered under water when lake Allatoona was constructed in 1950.

6. The first battle to be fought in Bartow was at the Octagon House near Adairsville in May of 1864. Joseph Johnston’s Confederate Forces of over 40,000 men planned to make a stand at Cassville, but retreated south of the Etowah river after burning the railroad bridge and adjacent smaller wagon bridge.

7. Adairsville resident, Lloyd O. Mauldin, Gunners Mate, served in the US Navy on board the USS Missouri. (Mighty Mo) While there  he witnessed the surrender of  Japanese forces in Tokyo Bay September 2, 1945.