Bartow/Cass County first attracted settlers who sought gold, but discovered rich deposits of iron ore and various other minerals. Even the early Native Americans mined Bartow ores such as manganese for ornamental purposes such as jewelry and trading. Mining for all practical purposes was the first industry to thrive in Bartow/Cass County. Among others, the early cupleo furnace pioneers were Joseph and Jacob Stroup and Mark Anthony Cooper. Products, such as iron, barite, limestone, manganese, and ocher were the profitable ores. The stone ore furnaces smelted pig iron as a preliminary rough product to be further refined in to tools or other commodities. Stone ore furnaces were built from southeast Bartow County between the Allatoona Creek community and as far north to the now abandoned Sugar Hill community near White and Pine Log on the Stamp Creek. Stone lime kilns were also built in Emerson and Kingston.

A variety of other early industry and manufacturing existed through out the county. Businesses ranged to include: blacksmiths, grist mills, tanning yards, rolling mills, distilleries, pounding mills, presses, saw mills and granaries .

Eventually, settlers expanded to other cash enterprises including agriculture, farming and timber. As cultivation developed in the South, cotton became king, but did not eclipse mining. The cotton region led to the rise of a pre-WW II textile manufacturing industry producing cloth fabrics, tire fabrics and a unique tufted weave that introduced the chenille bedspread products which were displayed/sold on the side of roads. These successful cottage textiles also encouraged the rise of “Peacock Ally” on old US 41 (Dixie Highway) and inspired the eventual Carpet Capital region from Cartersville to Dalton. The southern most end of the carpet industry is said to be Bartow County and is the residential home to the Shaw family who is legendary with centralizing the industry. As these businesses began to prosper, so too did the introduction of textile mills (yarn, threads, weaving, cloths, dye houses) . A major player in Bartow County was the American Textile Company, more casually known as ATCO. It was a major employer with its own community of mill village homes, school, general store and recreation facilities.  Other similar textile operations surfaced that made twine, garments and cloth such as Goodyear, EZ Mills and Spring City Knitting.

In the 1940’s “Alphabet Collins” established a 400 acre experimental farm and cotton gin named the Georgia Institute of Genetics (GIG) on Highway 20 located next to Georgia Highlands College of today. His leadership and experimental work increased the production of cotton per acre by more than one third. Here he work with a variety of seed stock and improved Bartow’s out put of cotton fiber compared to the six surrounding counties combined. The GIG operated until the late 1960’s.

Bartow County and Cartersville, in particular, continue to benefit greatly from three major transportation arteries. The first is the Western and Atlantic Railroad (W&ARR) built by the state of Georgia in the 1840’s and 50’s. It runs between Atlanta and Chattanooga connecting Bartow County to major rail links throughout the nation. Secondly, the Old Dixie Highway 293 and US 41 was the north – south corridor that eventually becane a modern day four lane that provides direct access to Atlanta. Finally, Interstate 75, a post WWII national highway project was delayed through Bartow County as a result of Lake Allatoona and mineral rights. It opened December 22, 1977 and was the final section of Interstate 75 to be completed in the nation.

As a by product of the adjacent W&ARR, the world’s very first outdoor Coca Cola sign, with a misspelled word,  was painted on the outside of Young Brothers Pharmacy. The new fountain drink of the day was a popular beverage among train passengers during stops in down town Cartersville. The first hospital established in Cartersville as a dedicated facility was the Howell – Quillian Clinic located on the corner of Leake and Lucky Streets.

1. The Western and Atlantic Railroad was built by the state of Georgia and is still owned by the state today. Since the Civil War the state has leased the railroad to private individuals,  NC&SL,  L&N and CSX among other rail companies.

2. Gold was first mined in Bartow County. Land lots that most likely contained gold were 4o acres in size and located in the southern half of the county. Non-gold lots were classified as agricultural and were 160 acres.

3. The Georgia Institute of Geneticsbuilt in the 1950′s  located on Hwy 20 next to Georgia Highlands was a cooperative between local farmers and the University of Georgia. A genetically altered cotton seed was developed here that produced greater yields than standard cotton seed. 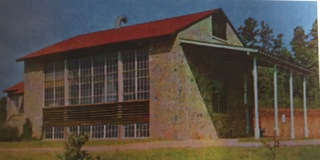 4. According to Lucy Cunyus, Asa Grig