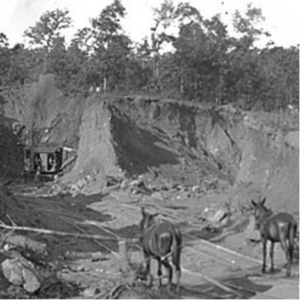 Emerson, originally known as Stegall’s Station, was first established as an agricultural community on land belonging to Emsly Stegall (1812-1888) of Pickens County, South Carolina. Emsly Stegall came to Cass County (now Bartow) in 1839 and settled on a 40 acre lot drawn in the 1832 lottery. To his good fortune, the route of the Western & Atlantic Railroad, surveyed in 1832, crossed his land. Upon completion of the railroad, a station was established and given his name with Emsly appointed as agent. Prior to the late 1880’s, Stegall’s Station remained a small community thriving on both agriculture and limited mining. No significant population existed as the land around Stegall’s remained under Stegall family ownership. The only pre-war structure surviving today is the home of John P. Stegall, the first Mayor of Emerson. John was the son of Emsly and served as agent for the railroad following the Civil War until 1890. He also served as postmaster for many years. The first post office was called Stegall’s Depot and operated between 1870 and 1875, followed by Stegall, operated between 1883 and 1888. 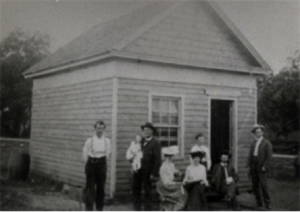 By April 1888, Stegall’s became Emerson in honor of Ex-Governor Joseph Emerson Brown (1821-1894) and was incorporated on November 11, 1889. The post office adopted the new name of Emerson in 1888 and has been in continual operation since. This name change was to give Stegall’s Station a name more fitting to a prosperous community. Lt. Col. C. M. Jones (1829-1910), formerly of the Confederacy, was the driving force behind this change. Jones succeeded in inducing several northerners to invest in this community, believing that Emerson could support an abundance of manufacturing plants which could turn the numerous variety of minerals found into a finished product, instead of shipping them in their natural state

In order to create the town of Emerson, the Emerson Land Company was formed primarily by John P. Stegall and C. M. Jones with the financial backing of several northerners. Its sole purpose was to acquire several hundred acres from Emsly Stegall, John P. Stegall and C. M. Jones in order to lay out town lots. The city was surveyed in 1889 by H. J. McCormick, with the street names of Minnesota, Tennessee, Kentucky, Ohio, Indiana, Michigan, Wisconsin, Georgia, Florida, and Vermont running east and west; First, Second and Third streets running north and south. East of the railroad was a new three story, forty eight room hotel to accommodate an influx of prospective citizens and investors. The Courant American newspaper in nearby Cartersville was quite complimentary of Emerson’s quest for growth. Published in 1888 and 1889 were articles on Emerson’s new telegraph office, the new Emerson Malleable Iron Plant employing 150 skilled mechanics, the increased shipments of iron to Birmingham by the Etowah Iron & Manganese Company, a proposal by Mr. Barber of Milwaukee, WI to build several hundred houses, a new manufacturing plant for paint, a new post office and express office and the prospects of an Emerson newspaper to be called the Emerson Graphite.

The vast expansion and population growth of Emerson was never realized. Though some were enticed to settle in Emerson, it proved too close to the growing town of Cartersville some three miles to the north. Following the Civil War in 1866, Cartersville had been selected as the Bartow County seat. In addition, the nearby community of Bartow less than a mile east discontinued its iron furnace operation in 1885, affecting Emerson’s economy. Of most importance was the passing of visionaries like C. M Jones and John P. Stegall. 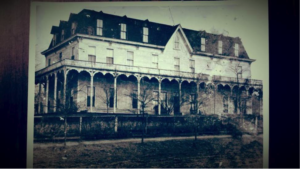 Today, the old depot is gone, as is the fine hotel which was once the pride of Emerson. Only New Riverside Ochre Company still mines the area. Doug’s Restaurant is the major anchor for the city, an inviting piece of Emerson’s history which continues to draw tourists and locals alike. However, this community historically tends to thrive around the churches, schools and thoroughfares.

Emerson is situated for substantial growth being on the railroad and bordering Interstate 75 and U. S. Highway 41. The main road through Emerson is GA Highway 293, known as the old Dixie Highway. One only needs to travel these roads to see the changes with the addition of the LakePoint Sporting Community, currently under construction, with tournaments and events which began in the Spring of 2014. LakePoint is on track to be one of the world’s largest and most unique destinations for travel sports. With more than 1,300 acres nestled in the foothills of the North Georgia Mountains and adjacent to beautiful Lake Allatoona, LakePoint will feature state-of-the-art sports venues and five million square feet of amenities including onsite hotels, restaurants, themed retail, bowling, ziplines, water parks and much, much more.