Following the Civil War, Cartersville, for a short time, pulled itself back on track with a railroad manufacturing economy. Little known to today’s citizens of Cartersville and Bartow County is a long forgotten industry that thrived in the center of downtown Cartersville. These forgotten businesses spanned less than two decades, but provided a major boom to the post war city regarding jobs, growth and service to the railroad industry.

Well before the row of familiar buildings standing left and right of the Grand Theater, today’s Museum Avenue was a bustling manufacturing giant. According to 1870 deeds and newspaper ads Cartersville once had a thriving railroad car manufacturing industry located in the heart of what is now the downtown square adjacent to the CSX Railroad (Western and Atlantic) and Grand Theater vicinity.

This business existed between 1870 and 1880. According to deeds, it occupied a footprint of approximately four city blocks. Deed records “roughly” describe boundaries as being between Tennessee Street (including Gilmer Street) and west to the Western and Atlantic Railroad (W&A RR) with Main Street to the south and Church street to the north. The plant was composed of steam power tools, kilns, painting buildings, wood planer and carpenter shops. 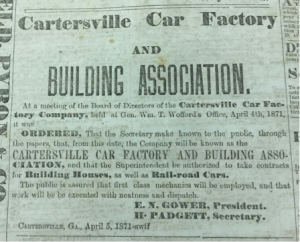 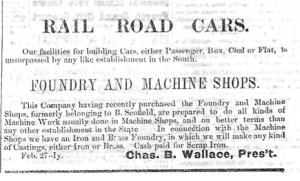 An article that appeared in the Cartersville Semi-Weekly newspaper on October 24, 1870 page 3 reveals an enthusiastic editorial about a proposed manufacturing company that would engage in the production of railroad cars. The article proclaims this business development as evidence of local prosperity and names the primary officer, Col. Padgett of Quitman, GA as the mechanical mind to lead the enterprise.

A follow-up editorial in the Cartersville Express on January 13, 1871 declares that all the Car Factory stock has been bought up, officers elected and a location for the business has been selected. That article continues with a flavor of chastising local talented citizens who declined the offer to participate as they must not have understood the good reasons for the business. However, the article concludes with a positive twist to proclaim that all would agree that it is all for the good improvement for “our miniature city.”

According to newspaper articles the corporation is headed by, E. N. Gower, President and H. Padgett, Secretary. (It also should be noted that E. N. Gower is a principle officer in the Gower and Jones Carriage business.)

By 1871 the Car Company is vigorously advertising in local newspapers. Initial ads feature the construction of railroad cars. Subsequent ads announce the company was authorized to expand to serve as a building association as well. The company revises its name to become the “Cartersville Car Factory and Building Association.” A number of deeds were discovered in the deed office that reflected land transactions on Cassville Road and other locations related to the Building Association activity.

When one considers the viability of a railroad car manufacturer, it becomes apparent that such an industry held merit in the area. Given the vital Western and Atlantic Railroad running between Atlanta and Chattanooga, it is plausible that a plant to manufacture cars would be useful. However, the added demand of local mining and its dependence on rail cars to transport ore to the main line is also a substantial reason to have such a convenient industry. And, just north was the Kingston wye and the Rome Railroad that also needed rolling stock.

Subsequent car factory newspaper advertisements would hype its services as offering contractors, builders and dealers fine materials in pine, walnut, oak, ash or poplar lumber in rough or dressed condition. Additionally the factory offers to fill orders such as sashes, blinds, doors, moldings, brackets and other items at low prices. They further tout offering passenger cars, boxcars, flatcars unlike any in the South. Some speculate that the factory could employ up to 400 hands.

As the factory builds out operations it begins to feature testimonials in the local paper including a strong testament from former Governor, Joseph Brown who proclaims the first cars turned out for the W&A RR are first rate.

The Cartersville Car Factory eventually negotiates to acquire the prominent Bolivar Scholfield Foundry in what seems to be a graduated deal between 1872 and 1874. The foundry was conveniently located to the Car Factory and may have adjoined the property. However, the foundry came with what appears to be a great deal of debt. As an expansion Mr. Charles Wallace financially backs the endeavor. He begins to piggyback on Car Factory ads as the new proprietor of the former Scholfield Foundry and the president of the Car Factory Foundry and Machine Shops.

By 1877 an editorial appears in the October 11, 1877 Cartersville Express newspaper by W. H. Hackett entitled, “Manufacturing in Cartersville.” It expresses the rich manufacturing opportunities and resources available in Bartow County. A portion of the article describes the Cartersville Car Factory and its location next to the Western and Atlantic Railroad. He includes a brief inventory consisting of a main building with dimensions of 40 x 80 feet, erecting shop of 40 x 100 feet, other buildings of equal size and machinery such as 30 horse power boiler and engine, 40 foot Daniel wood planer, double cylinder planer and machine saws, molding machines and tools. He concludes the Car Factory description portion of the article by advising it is now for sale.

According to an article that appeared in the Free Express on June 30, 1881 hard times had fallen on Bartow. It briefly encourages enterprising citizens to purchase the old car factory and suggested it be converted into a furniture factory. It further mentions how highly adaptable it would be for that purpose and plenty of timber can be had at any price. The article lists a variety of people, businesses and farms that are struggling. 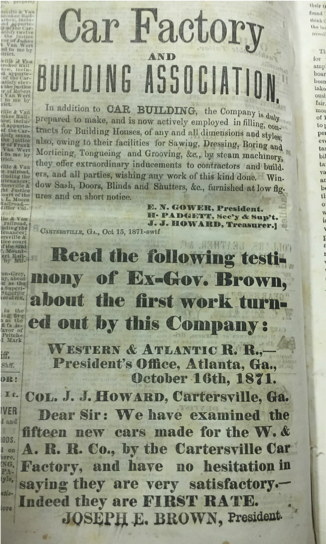 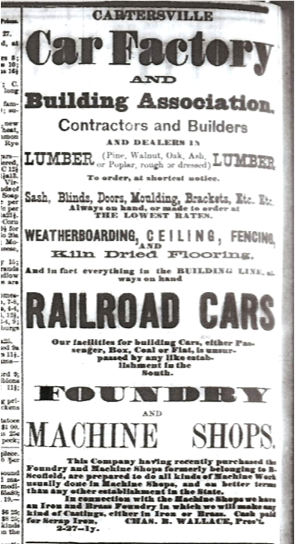 By 1880 a competitive operation surfaces called the Georgia Car Company. This enterprise has indirect connections to the officials operating the Western and Atlantic Railroad. Deeds in the Bartow County Court House find this operation located about two tenths of a  mile south of the Cartersville Car Manufacturing site also adjacent to the W&A RR.

Deed and newspaper articles describe its footprint to be approximately four acres beginning at the intersection of Leake Street and fronting the W&ARR running 200 feet east toward Tennessee Street and cornered by the Wallace Foundry. Several deeds were filed to assemble an area of about 600 feet by 200 feet. (Approximately between current day Tribune News building on West Avenue and Leake Street intersection along W&A RR.) A June 9th 1881, article in the Express reveals that the City is delighted to announce the prospects of this car factory and that the authorities have exempted them from taxation for a term of five years.

A June 30th, 1881 article in the Free Press page 3, states that the company will be a boom for the town and double the machinery is expected to be installed as was first thought. It appears conditions were favorable to resurrect a car factory as a demand still existed for the industry and a waiting and skilled labor force was in place remaining from the first car factory of 1871.

An April 6, 1882 article in the Cartersville Free Press offers an impressive description of the plant. It speaks of a 40 x 210 feet erecting building, 40 x 240 feet paint building, a working building of 40 x 180 feet, machine shop of 40 x 180 feet and a blacksmith shop of 40 x 90 feet, plus office buildings. The dry kiln is cited as the very first built in the south at a cost of $3000.00 and contains over a mile of pipe. The article mentions that the Car Works employs over 100 hands and added nearly 500 to the population of Cartersville.

The officers of this corporation are President John H. Flynn of Atlanta, Superintendent C.E. Lucas and Secretary/treasurer Major C. T. Watson. The clerk of the plant stated that currently they manufacture about twenty-five cars per week. Production primarily consists of freight, stock and coal cars and soon to be moving to passenger cars. The company will invest over $25,000.

Articles in the Cartersville Free Express between September 22, and December 8th, 1881 continue to credit the original Cartersville Car Factory with good pay and employing 150 hands. The promise of a second car factory along with existing gristmills and iron manufacturing are yet more reason to be encouraged for the future of the city.

According to the September 21, 1882, issue of the Free Press news the Georgia Car Company will be served by the foundry of Murry, Stephenson and Mc Entyre with forty hands currently employed. They already have orders for 800 car castings. The car factory will begin production with manufacturing five cars per day. Initial contracts cite the Memphis and Pickburg railways ordering 800 cars. A great deal of pride is touted that the car company will be able to produce and sell cars much more cheaply than other competitors.

The 1883, Cartersville City Directory lists the Georgia Car Company as being established in 1881 and making all classes of cars. It further states that it employs 200 hands, operates a foundry and has added greatly to the material wealth of the city.

It is not clear in deed records or news articles of what happened respectively to these two railroad car manufactures. They were obviously over lapping and competing for a short time. It appears the Cartersville Car Factory began to struggle by the late 1870’s and eventually closed.

A November 7th, 1883 deed reveals that William Noble, President of the Georgia Car Company sold what appears to be the core manufacturing property to Mr. Puckney S. Hightower consisting of 4. 5 acres. The deed describes the tract as likely being the production site between the Leake Street and W&A RR junction, running south approximately 600 feet and bounded on the east by Tennessee Street.

In retrospect, this research perhaps reveals a new piece of unknown reconstruction suggesting how Cartersville and Bartow County emerged from the post Civil War carnage. The railroad car manufacturing age coupled with mining and agriculture provided resurgence to employment and revenue allowing the populations of Cartersville to recover from post war destruction.

Above is an 1850 deed plat diagramming the Cartersville Public Square with numbered land lots. This plat is prior to the Civil War and the railroad car factories. As of today the only fixed or remaining building site would be the depot located in the center of the plat. (Deed Book I, Page 560, Bartow County Deed Office)